So I spent yesterday making cheese whilst Monica and David were on goat duty.  Sometime during the afternoon I received a very brief text from David which simply read 'B****y Ginger!'.  Told you it wouldn't take long.

When I arrived home later that afternoon, Ginger goat was hanging half way out of a gate in an attempt to get back out into the barn again.  Although she has slimmed down again, her udder is now full size and she struggles to get it all through the gap comfortably!!  Needless to say that she does eventually manage to get out, with a bit of a wiggle ..  As David said - B****y Ginger!!

And it would seem that someone else has followed her bad example.  A small goat by the name of Hugo.  As he can see the rack of feeding teats on the automatic machine from his pen, he has decided that if he squeezes himself out through the bars, he can go and have a sneaky feed whenever he likes.  So, Francesca spotted this and moved the rack to a higher position.  Not to be outwitted, Hugo stands right up on his tippy toes and can still just about reach: 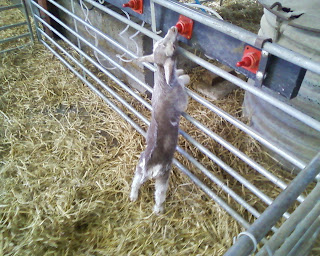 Sadly for Hugo, the machine is not switched on all the time and so all his effort is for nothing.  Poor Hugo!

And here are some of Hugo's friends enjoying the sunshine in their pen this afternoon: 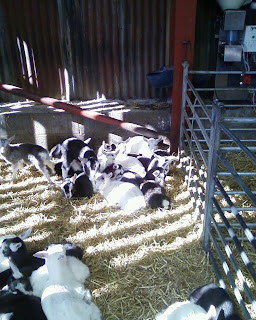 And what of the goatlings in the other barn?  They are no longer the babies!  And see how tall they have all grown - we have raised some of their hayracks to make feeding more interesting for them: 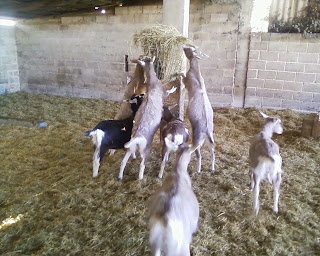 Seems only yesterday that they were all born ... and in a few months we will be putting the males in with them to get them in kid.  Time seems to go so fast these days!
Posted by Ellie Goat at 22:13