A night of scanning

Yes folks, it's that time of year again when the scanning man came to call to check which goaties are pregnant and which are just fat and lazy!

We decided on a different tactic this year and ran them all through the milking parlour so that Michael did not have to crawl around on his knees to get under their ample stomachs ... It all worked very well (helped by a little extra bit of food in their troughs), although there was a bit of ear-pointing as they came running in for the second time that evening!

So, I have still yet to collate all the information, but it looks like we are due to have around 160 babies starting around mid-March.  Only a few sets of triplets this year - mostly twins.  And some of our older girls are due to be mums again as well.  But the best surprise of the evening was one of our stroppy new girls, big brown Zenobia goat .. 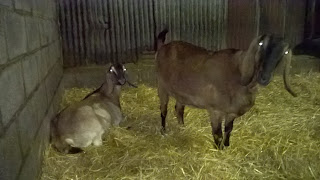 In kid with twins!  Very exciting as, although she is over 4 years old, she has never been put in kid before by her previous human and we were not sure that she would take ... the stress of the move to our herd could well have affected her but it seems that she and Hilton did indeed have a little romantic encounter when noone was looking!

Husky remains purely ornamental because of all the problems we had with her horrendous udder last year .. but her daughter, young Monkey goat, is having twins.  So, Husky will be a grandma once again!

On a more sombre note, towards the end of last year I noticed that one of our older ladies, Dusty, had a very swollen jaw .. 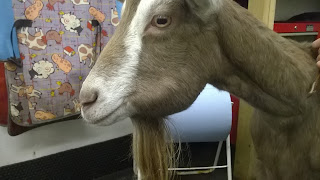 Lovely vet Peter came to check it out and was concerned that something nasty was going on in there.  So I took Dusty for a little ride up to the surgery where Peter x-rayed her jaw.  And this is what we saw .. 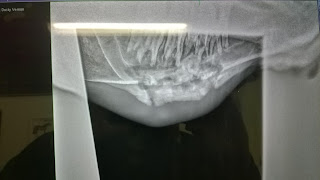 This is a picture taken of the laptop screen and the image appears in the middle.  You can see the roots of her teeth coming down the screen in the centre (under that bright white line) .. below that there is a white line which runs across the screen from left to right (curves upwards) - this is the normal jaw line.  But, as you can also see, there is a lot of stuff around this line - some kind of mass in the middle of the picture.  This is abnormal bone growth and, unfortunately, it looks like Dusty has some kind of bone tumour in her jaw.

So, what to do?  No real treatment for this kind of thing sadly ... so, put her to sleep or leave her and see how she gets on?  Well, at the time she was still very happy and healthy and was eating well.  And, there was also the chance that she was also in kid .. So, we decided to keep a close eye on her and see how things progressed.  Obviously, at the first sign of distress, she would be put to sleep ..

So, now we are a few months down the line ... Dusty is still happy and healthy and eating well.  Her jaw has not grown any bigger and we have also now confirmed that she is in kid with twins.  So, the right decision we think!

And finally ... when Shares is not busy standing in buckets .. 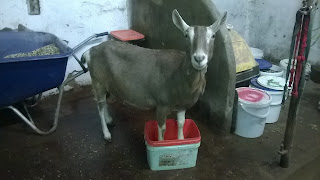 She is constantly demanding attention ... Here she is in the parlour tonight ..