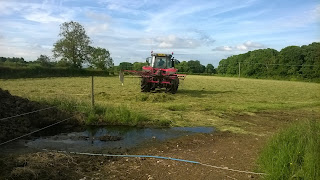 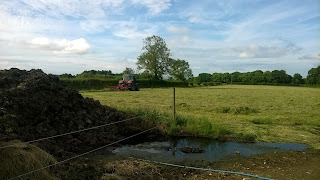 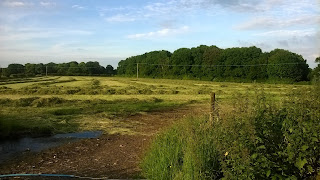 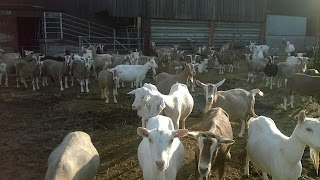 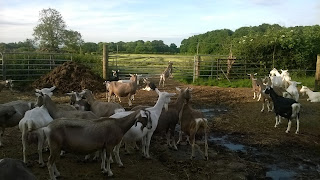 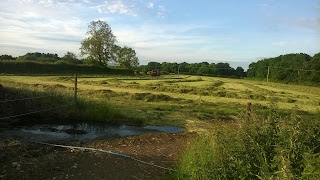 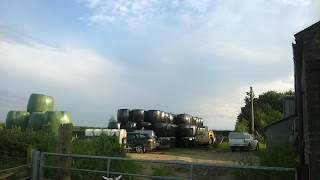 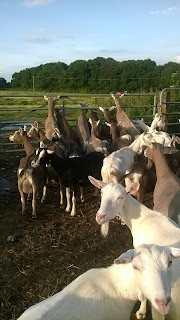 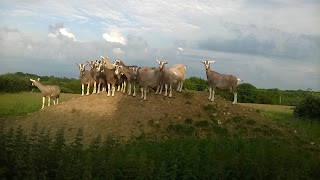 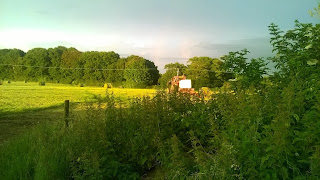 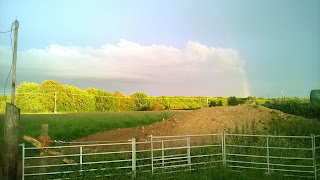 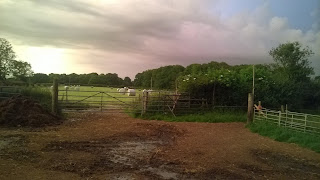 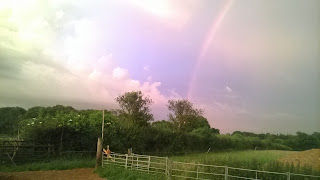 Frequent visitors to our little blog will recall many posts about our dear Husky goat. 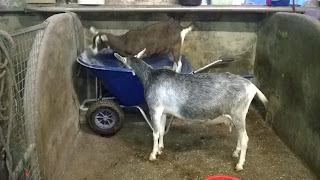 We have followed her antics since she was a baby, through her stroppy goatling year (remember us having to quarantine her to stop her jumping in with all the boys?!) and then as a responsible parent to Monkey and her siblings.

Although she is a valued milking member of the herd, she is also something of a special goat and everyone at Ellie's Dairy has a bit of a soft spot for her.  And boy, does she play on the attention!

But our dear Husky has had a traumatic few months and, now she is safely out of trouble, I thought it was about time to tell you the tale ..

Husky kidded in early March and had 2 beautiful little chaps 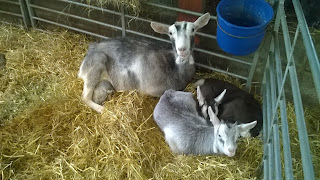 But, a few days after kidding, Husky fell seriously ill and we had to fight to save her.  After a couple of horrendous days, we pulled her through but she was left with a very nasty gangrenous mastitis in one side of her udder.  Things did not look promising .. we have seen this only twice before and, in both cases, we have lost the goat.

I won't dwell on the details but it's all pretty nasty - basically, a large part of the udder turns black and cold.  Then it dies off and falls away.  We called our lovely vet Peter in to help us make the decision - should we continue to fight or would it be kinder to send Husky to goatie heaven?

Totally impartial, Peter said that he thought it was worth fighting for her.  Smiles all round from us and the vet students who had all been expecting the worst!

So, we carried on ... a lot of care and attention was lavished on Husky.  Bucket loads of special lavender and olive oil cream carefully applied by a succession of vet students, endless cleaning and checking, constant monitoring and lots and lots of bananas!!  We also decided to leave the boys with her for company and to keep her stimulated.  Also, as one side of her udder was perfect and full of milk, it was better to let the boys feed rather than put her through the trauma of having to be milked twice a day.

And so, as the udder progressed through this stage (the blue colour is anti-bacterial spray, lavishly applied by David!): 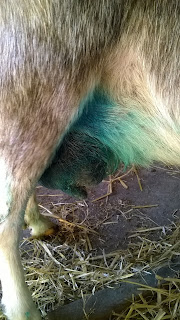 Eventually, it all dried up and fell off.  Imagine my surprise when I found this in the straw early one morning! 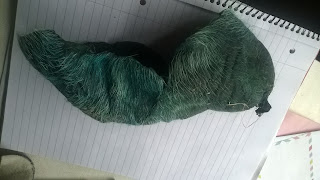 And, a couple of months later, everything has completely healed and Husky's rear view now looks something like this ... 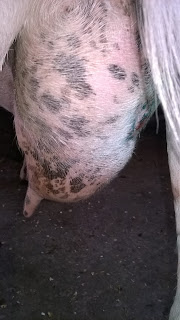 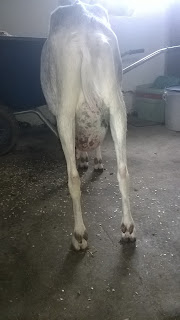 A perfectly formed half an udder!!

But we have decided that once the boys are weaned, she will be dried off and will never be put in kid again.  She will retire from milking and will become a purely ornamental goat!  And we are certain that Husky will be very happy with this arrangement as she will never have to work again!

Who feels silly now then?!

As we have already seen, Shares likes to bring her little chaps into the parlour for their meals. 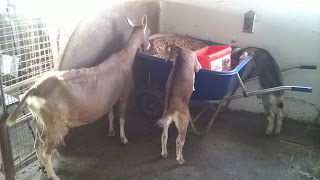 They generally wait by the wheelbarrow while she goes up the ramp to be milked (not that she has any spare milk for us - she gives it all to the boys!).  Growing in confidence every day, they are starting to get a little more naughty ..

So, tonight, they were skipping about near the wheelbarrow when this happened: 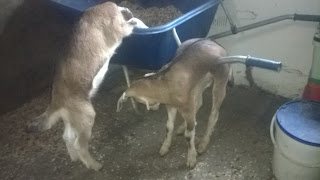 We were laughing so much I could hardly keep the camera still! 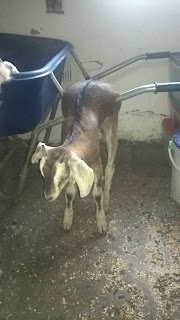 Completely stranded, he had to be rescued by a human .. How very undignified!

Fortunately, it was only his pride that was injured .. and he skipped off quite happily with his brother!

Making hay while the sun shines

Well, haylage actually ... So, after a freezing cold week that saw me back in thermals, the weather turned completely around and we had a stifling couple of days over the weekend.  David spends most of his time glued to the weather reports this time of year and so he decided that he should have a big enough window on Monday/Tuesday to get one of our fields mowed and baled into haylage.

Haylage is a slightly fermented grass - baled slightly damp (with no additives) it smells beautifully sweet like a really nice cider. The goaties absolutely adore it and all the nutrients in the grass make for wonderful milk!

So, off he went mowing on Sunday .. All that lovely goatie manure has certainly made the grass grow and he was amazed at how thick the crop was.  On his return, there were mutterings about me having to help out by driving a tractor as well so that we could get everything baled and wrapped before the weather changed.  But I had a much better idea ... young Joe is a very versatile chap and has driven tractors before ... I was sure that he would be able to pick it up again pretty quickly.

And so, after doing a bit of bottling for our milk orders on Tuesday morning, Joe was packed into the old tractor: 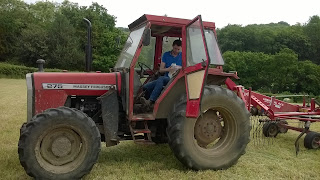 Closely followed down the road by David with the baler: 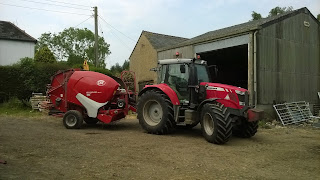 A quick crash course on how to row up the grass ready for baling and Joe was all set to go.

And here he is in action:


Joe had to drive up and down the field using the rake on the back of the tractor to throw all the grass into a line ready for David to come and bale ...

Once the lines are ready, the baler comes in:


When the bale reaches a certain size, the baler automatically puts a couple of layers of netting around it to hold it all in place and then spits it out of the back:


It's really important to make sure that the bale drops so that it does not roll away downhill!  It's quite an art but even the most experienced farmers can have a mishap occasionally.

The final task is to load the bale onto the wrapper and get all those layers of plastic wrapped round to keep the bale nice and dry and airtight so that it can ferment.


Once the bales are all wrapped, they are weather-proof and can sit in a field for a few days in bad weather until they are all stacked on a trailer and carted back to the farm.

David managed to bale and wrap all 195 bales about 30 minutes before the thunderstorms arrived!
Posted by Ellie Goat at 23:09 No comments:

The return of the dairy fairy ..

Hallelujah!  Julie the dairy fairy is back in action!  Hurrah!!!  Boy, have we missed her!

Complete with new bionic knee, Julie spent a day packing our delicious fresh Ellie's cheese ready for our weekend markets.  I was assistant fairy to start with but then a much more capable fairy in the shape of Joe took over. 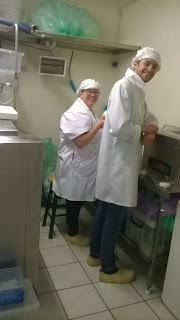 It is SO good to have her back.  She is never allowed to have any time off again.  Ever.

Meanwhile, out in the barn, showjumping Shares has been teaching her little chaps how to sneak through the bars in the gate so they can run around the barn with her .. From time to time, the excitement is all too much and they just have to have a little lie down.  Usually in a very comfy warm spot ... 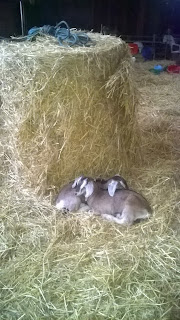 When the rain stops, she takes them outside for a little wander and a snack; 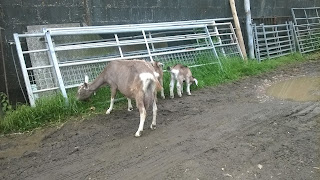 And then into the parlour for milking time .. Shares is the brown goat in the middle .. 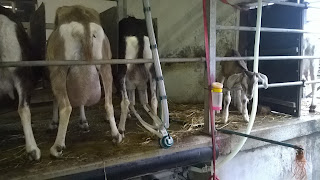 We have given up trying to keep any of them in!  She is happy wandering about, tends not to cause any trouble and keeps an eye on the babies if they start to stray too far from her.  I suppose she is a good goat really!