As the days get shorter and the mornings get darker, it becomes increasingly difficult to get those goatie girls out of their comfy beds for milking.  Some of them take advantage of an empty hayrack to bag the best spot in the barn .. 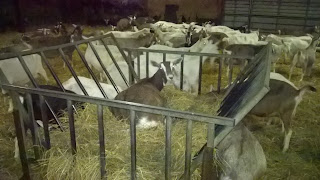 Others just stay curled up fast asleep and hope that you won't notice them .. Not sure who that ear belongs to! 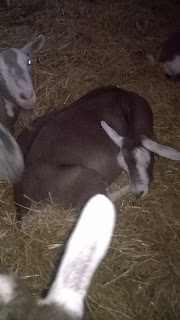 And in the evening, they are all very keen to get back indoors - they don't like standing outside in the dark.  One side of the barn is just made of thick wooden boarding at the bottom which goaties like to gnaw .. Over the years they have gradually worn it away in places and there are odd holes which they can stick their heads through.  It all needs to be properly replaced before bad weather sets in, but at the moment they can still use the holes as windows ..

So, in the evening as darkness falls and goaties are still outside, this tends to happen: 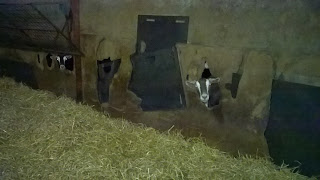 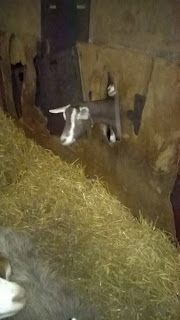 And from the outside, the view is something like this .. 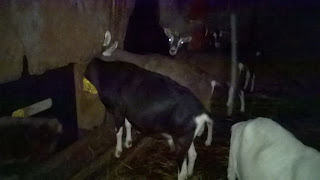 Never a dull moment with goats!

Our dear Husky goat is gradually drying off that one-sided udder which she is extremely pleased about as it means that she does not have to come in for milking twice a day.  So, back to her old tricks, she takes full advantage of her new status as one of the 'useless goats' and helps herself to food out of the wheelbarrow and anywhere else that takes her fancy.

And should her chosen bucket be tightly closed, it would appear that this is no obstacle to a determined Husky goat ..


Young Hilton is still a very busy boy with lots of girls queuing up for his attention.  This morning I could hardly see his pen through the crowd of wagging tails.

The girls outside his house are noisy and fight to be next to the gate so that they can talk to him .. the girls inside just won't leave him alone!


And amongst all this noise and chaos, old Betty goat just soldiers on in her own little world .. But even she can still raise a smile with her antics.  One day last week there was just something too tempting at the very bottom of a bucket ... And this is what happens to naughty greedy goats .. 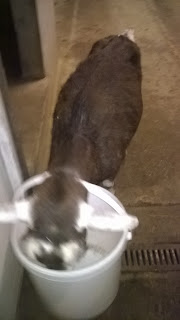 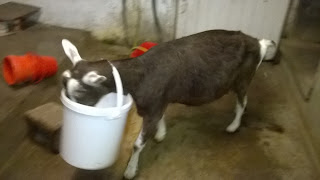 'Tis the season for romance ...

Well, I am not sure that 'romance' is the right word ... but, following on from our last post, our new boy Hilton has suddenly become a very busy boy!

David rearranged the hay barn to give young Hilton a lovely big house where he had plenty of room for entertaining any ladies who may show an interest in visiting him.  The gates at the far end were positioned so that he had a panoramic view of all the goatie girls in the main barn .. and they were also able to talk to him .. 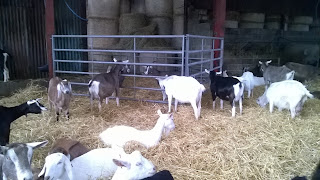 His first visitor was one of our older ladies who was spotted making eyes at him through the gate and wagging her tail earnestly ... I let her in with Hilton (who was very excited to have his first romantic encounter) but it seemed that all she wanted was to stick her head in his food bucket and eat all his breakfast.  As Hilton approached, she growled at him and clamped her tail down firmly over her bottom!  Poor boy was most upset ...

But, all was not lost as later that same day one of our little fat goatlings, Clarissa, took a fancy to him.  And so it came to pass that young Hilton finally began his new career as the Head Boy at Ellie's Dairy! 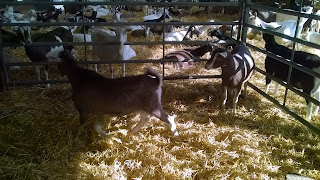 He has had a quiet few days with no visitors but there must have been something in the air this morning as he had quite a crowd of girls around his gates, all wanting his attention. While I was busy at market, David had his hands full with hordes of noisy hormonal goats!  At the last count this evening when we put another group in with him, he had 'entertained' around 20 girls today!  I think he should sleep well tonight (if the girls allow him to)

The weather has continued to be fabulous and the goats have been making the most of the dry weather to continue grazing in their field .. not sure it will carry on for much longer though.  They are quick to run outside after milking and are still enjoying their pea straw as the early morning mist rolls up the field.. 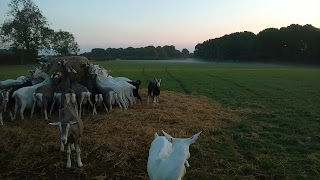 Our young goatlings are all growing into quite big girls now but they all still tend to stay together as a group. 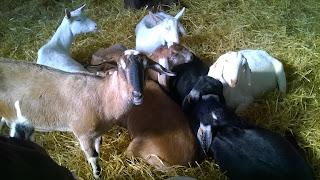 That's Mbuzi staring at the camera!

Some are very brave and are venturing into the milking parlour with the older girls.  Needless to say, those two naughty brown things (collectively known as 'The Chocolate Frogs') were the first of the youngsters to come in: 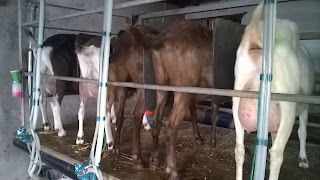 At the opposite end of the goatie spectrum, we have also had to say goodbye to a couple more of our older ladies, Columbia and Magenta.  These two sisters were over 10 years old and have always been inseparable.  These pics were taken a few years ago by our talented artist and photographer friend Sue Clinker: 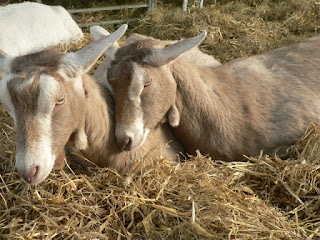 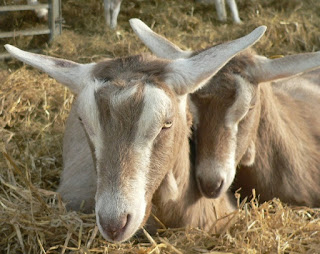 Magenta had recently lost a lot of weight and, despite tempting her with all manner of treats (like digestive biscuits and bananas) she was clearly not happy.  She suddenly became very unsteady on her feet and David found her one morning struggling to stand .. There was no hesitation in calling the vet ... but we also took the tough decision to have Columbia put to sleep at the same time.  She was starting to look thinner and, although she was still pretty bright and alert, she would not have done well without her sister by her side.  They were always together and never apart ... so it was only right that they should make that final journey to the big goatshed in the sky side by side.

Meanwhile, life in the dairy continues as usual with yours truly having to turn her hand to lots of different jobs again as various members of our team take some well-earned holiday before the madness of the festive season begins ..

Whilst Joe was enjoying a restful fishing holiday, I was working on our stall at Borough Market and enjoyed having the chance to snap yet another early morning picture of one of my favourite London views .. 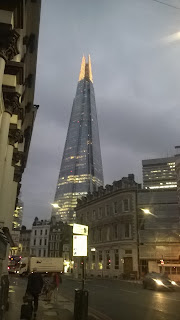 I never get tired of looking at the Shard!  It's just stunning ..

And for those of you who only ever see Joe working at Borough .. here's another side to his talents .. 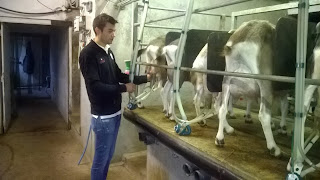