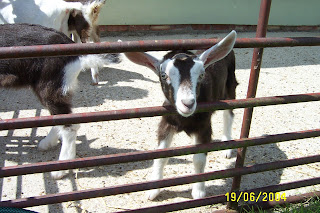 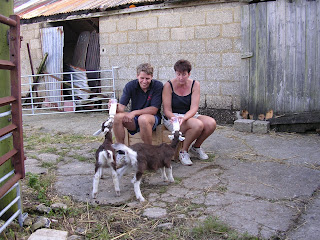 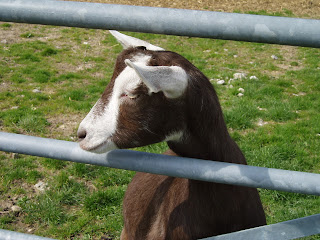 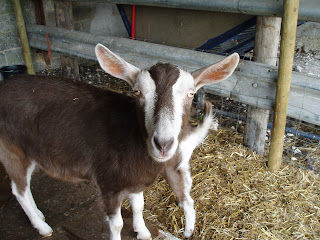 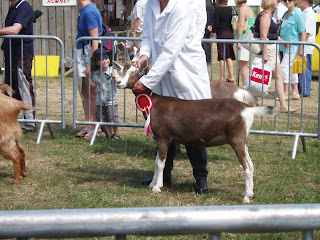 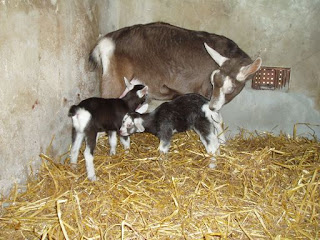 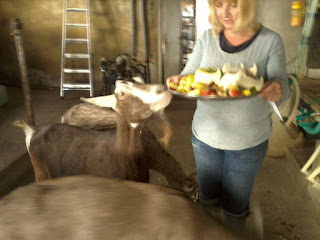 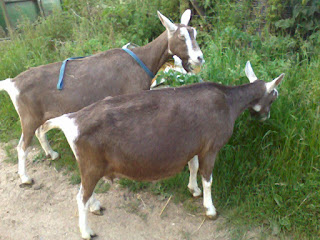 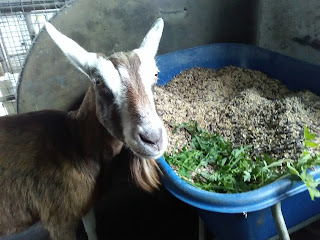 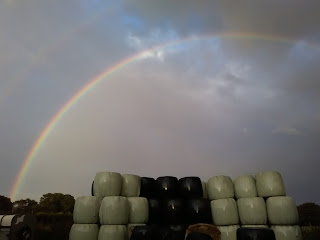 We spend so much of our time working with those goatie girls that it's easy to take the other half of the herd for granted ... those lovely boys!

All our boys live together in a separate area - our stud boys: 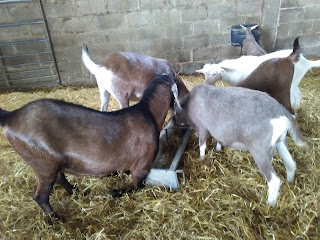 and our little meat boys: 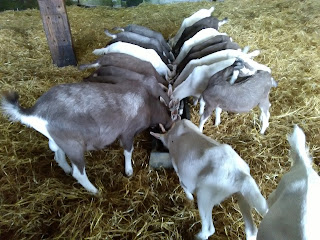 Big Hugo is in charge, ably assisted by young buck Hilton and stud-boys-in-waiting Magellan and Ivanhoe ..

And, as you may remember, there is also Jack and Babba.  Two of our chaps who never quite made it to the butcher ... Now almost fully grown and catching up in size with daddy Hugo ..

Babba is a beautiful boy with his long elegant ears: 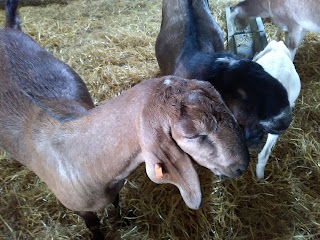 And Jack is a bit of a silly thing ... If you get too close, he will happily lick your nose like a dog! 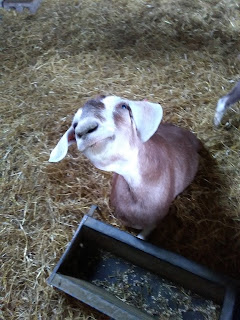 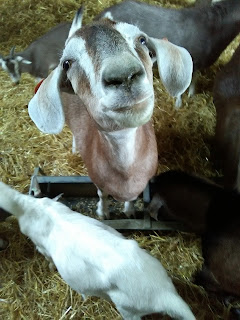 The big chaps are very tolerant of all the little people and can be found snuggled up next to them at bed time.  Or, like Hilton, surrounded by his sons at feeding time this evening! 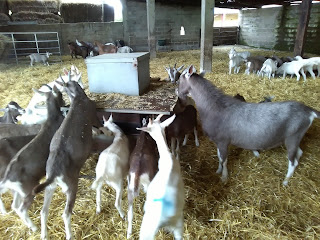 Please can someone explain where the last 4 months have gone??!  Blimey .. what happened there?!  No, we haven't disappeared off the face of the earth but I do admit that it's been a bit of a long time since I managed to sit down in front of my laptop and string a blog together ..  No excuses really - maybe I'm getting busier or older or something but, by the time I finish with those goatie girls, have dinner and do paperwork and email, there's just no time left for blogging and I often find myself face down asleep in my keyboard (and wake up with QWERTY .. imprinted on my forehead)

In my defence, I have managed to keep twittering (when we have had a mobile signal!) so hopefully some of you may have been reading our news up there.  But here I am .. alive and kicking and (hopefully) ready to get back into the swing of keeping you up to date with all things goatie ..

So, a quick waltz through the past few months .... Kidding season came and went.  The usual endless round of babies, new mums, buckets and buckets of milk and sleepless nights.  We had a few weeks with our wonderful vet students - a new lot this year and they were all absolutely fabulous!  So, many many thanks to Joe, Erin, Arabella and Lucy.  Couldn't have done it without you all and we hope to see you again soon!

We ended up with about 150 gorgeous babies .. around 50/50 male and female.  Sadly we did lose a couple on the way which is always gut-wrenching, but we are always happy that we try and do our very best for every single one.  Just that sometimes, there is nothing more you can do ..

Here's a few pics of those bouncing babies for you to enjoy: 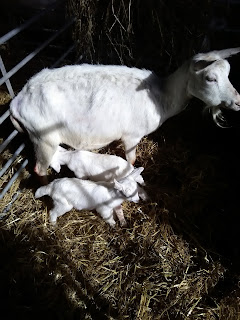 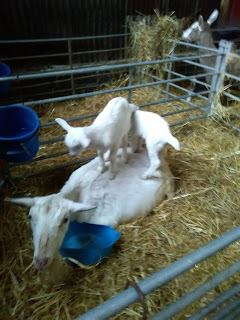 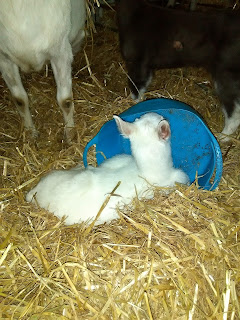 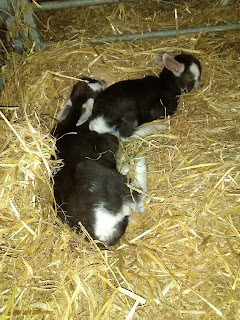 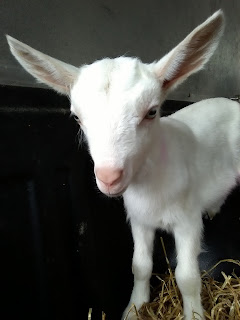 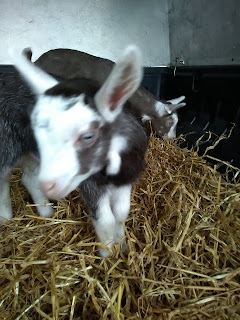 And, not to be outdone, the Gracie Moos provided us with 7 lovely calves between them all.  Such gorgeous little creatures who are all growing up very quickly! 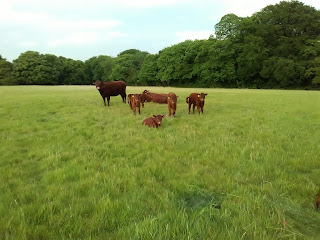 Harvest is in full swing at the moment and David is really busy helping out neighbouring farmers with carting grain and baling hay.  Thanks to the good weather and David's impeccable timing, we have already got all our own haylage baled, wrapped and safely stacked ready for the winter.  Those goatie girls have got plenty to eat for the next year!

On a more sombre note, we have had to say goodbye to some of our older girls during the past few months.  Our beautiful Diddi goat died very suddenly one Sunday morning when I was away at market .. David was there with her but I never got the chance to say goodbye: 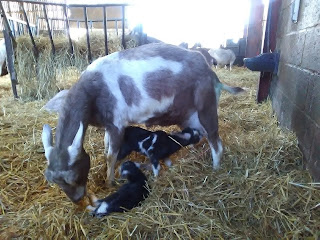 But I was there when we lost lovely Millie and two of our characters you will be more familiar with - dear showjumping Shares and long-eared Cleo .. As you may remember, Shares was our first mum of the year: 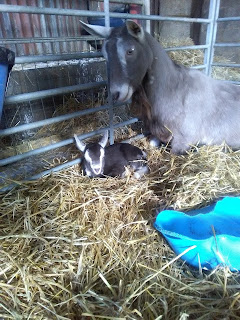 She was absolutely fine after kidding and was happily up to her old tricks, jumping all the gates around the barn.  But several weeks later, she started to go downhill rapidly - she didn't want to eat (not like Shares at all!) and just lay around looking miserable.  A visit from the vet confirmed that she had a serious heart condition which would not improve and so the sad decision was taken to send her to the big goatshed in the sky .. She was a very feisty, stroppy old girl and we miss her very much.

Equally sad was the demise of our beautiful Cleo .. Those of you who follow us on Twitter will have seen that Cleo had a hugely difficult kidding.  It took all our skill to deliver her and, miraculously, her female kid survived the ordeal .. 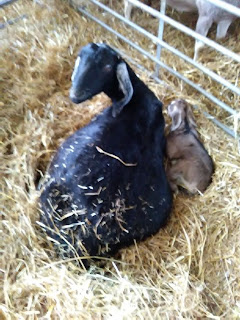 Cleo was pretty poorly for a few days afterwards but then seemed to pick up and was doing really well, being very attentive to her little Olivia who was doing a great job of looking after her mum.  One afternoon a few weeks later, I started to move the goats across the barn ready for milking and found Cleo fast asleep in the middle of all her friends, with her head stretched out on top of her sleeping baby.  Only she wasn't asleep ...  Poor Cleo.  Young Olivia was gently moved in with some other babies the same age with whom she quickly made friends.  She is a very bouncy, happy little person with the most ridiculous ears! 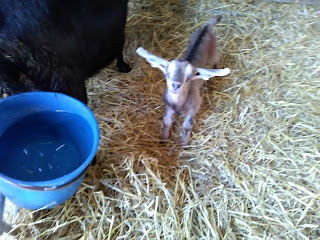 So, as you see .. a few months of ups and downs.  And in the midst of all this goatiness, the dreadful events at Borough Market and Grenfell Tower which shook us all to the core.  Our hearts go out to all those affected and we will never forget the horror of events which were very close to us and those who work with us.  We were all very lucky .. we remember those who were not.