It's a boy thing.  Always losing your keys.

And so it came to pass that human David lost his keys to the truck.  Somewhere in the goat barn.  How do we know this?  Well .. as I walked out of the barn, the lights on the truck flashed, the doors unlocked and the interior light came on.  Which meant that one of those goatie girls must be standing on the lost key.

Brainwave!  Borrow a metal detector and walk the entire barn in search of lost keys.  And this is what happened: 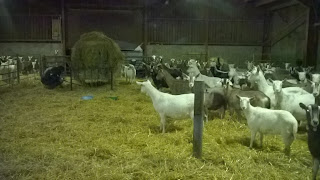 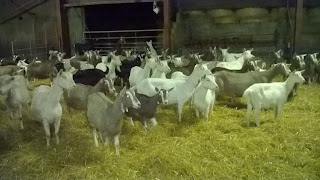 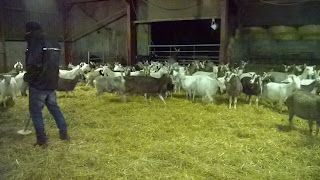 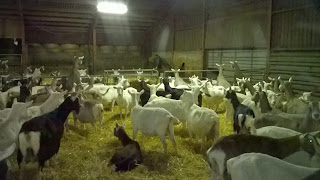 Much pointing of ears!


I have to say that the girls were not at all impressed with David's search.  They stared at him, pointed their ears and then ran out of the barn.  Changed their minds and ran back in ... Turned round and ran back out again.  Very amusing ..  But still no keys found.  The search continues ...
Posted by Ellie Goat at 23:35 No comments:

So, here's an interesting thing .. 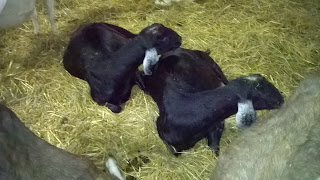 Early morning in the barn and the two Anglo-Nubians are sitting next to each other.  Mum JoJo to the left and daughter Cleo to the right.  So, what's so interesting about that?  Well ... as you may remember, babies are taken from their mums after about a week when mums return to the milking herd.  We continue to feed all the babies until they are weaned.  Babies grow into goatlings and then goatlings are gradually introduced back into the milking herd before they are mated and become pregnant so that life is not so stressful for them when it comes to kidding and milking in the parlour.

So .. this means that, although the goats are all in the same area, babies do not come back into close contact with their mums until around 18 months old.

Autumn/winter mornings always start with the same routine with us having to wake up lazy goats for milking time.  They hate getting up in the dark (who can blame them?!) and some of them will try and ignore us for as long as they can .. 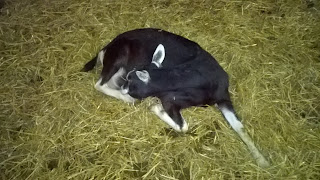 Eventually, we manage to get all the milking goats over to one side of the barn - you can see the parlour lights in the background .. 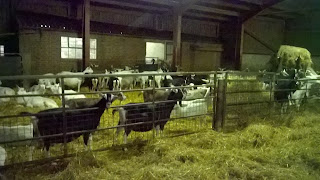 Which leaves the goatlings, a few kids and the old girls over the other side of the barn to enjoy their breakfast in peace .. 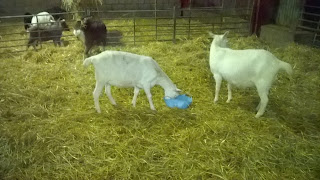 Every couple of days we roll out bales of new straw so that everyone is warm and cosy in all this damp and windy weather.  And it is interesting to note that this task is handled completely differently by the male and female humans.

Male humans just roll the bale out and leave the straw flat in lines .. so all the goats sit in rows, like they are on a bus.  Female humans spend much more time laying out the straw - it all has to be spread properly and fluffed up so that it is lovely and comfy for those goatie girls coming back in from milking.  I always think it is like plumping up cushions on the sofa.  It's a girl thing ..

And, of course, you have to make sure that there is plenty of straw sprinkled into those far corners as that is where many of the old girls prefer to settle down .. like Thelma: 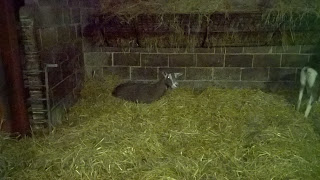 Everyone loves new straw and the goatlings are always keen to help: 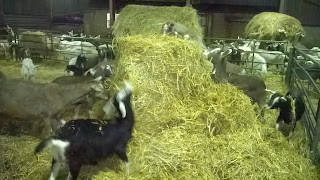 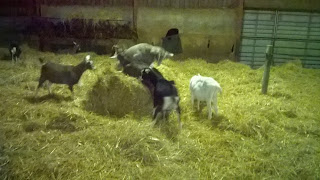 Then we open the back door and everyone comes running back in.  Incidentally, that noise you can hear in the background is another one of those hormonal goats in season!!

An excess of hormones!

As a novice goatkeeper, I remember wondering to myself how we would know when a female goat was in season ... Many years later, as a more seasoned goatkeeper, I still chuckle when I think about it ...

Give you a clue .. Just a quick peek into the barn early one morning as the girls were all waking up..


And that carried on all day.  Even when she was put in with Fenn ... In fact, later in the day, Fenn was lying under the hayrack with Florie standing next to him still bellowing in his ear!

The Monkey business in the parlour (and elsewhere!) continues ... Still loves to jump into the wheelbarrow at milking times.  But, as she gets bigger, she has now discovered that she can reach other things that need to be investigated .. 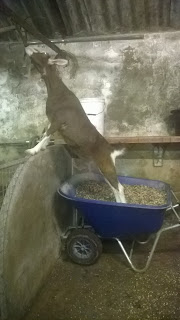 But, after a while, it all gets too much and she has to have a little lie down .. 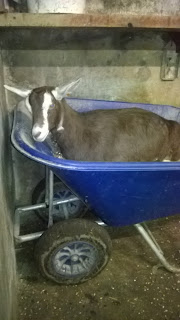 Meanwhile, mum Husky appears out of the darkness at the back gate to the parlour and waits patiently to be let in .. 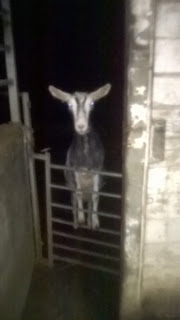 And it's been another busy week for the rest of the goatie girls, as you see ... 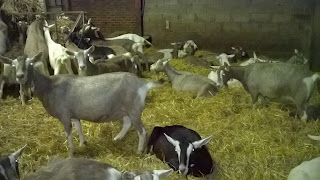 Busy eating, busy lying around, busy getting fat, busy staring at the camera .. you get the general idea!

But not even those goaties have been as busy as Marmite cat ... Hard at work all week keeping the back of the armchair warm: 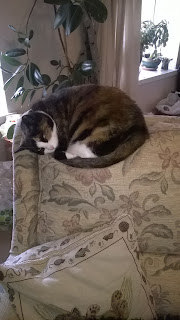 Anyone got a couple of million to spare?

The Slow Food and Living Market at the very sumptuous Rosewood Hotel on Holborn is not our busiest market, but it certainly is the most interesting!  I love people-watching and there is always plenty going on in the courtyard for a nosey person like myself!

Take today for example .. two of the most beautiful Mercedes ever built, parked in the courtyard.  One classic and one modern, they are both owned by the same man.  Being a bit of a petrolhead, I wandered over to have a look .. 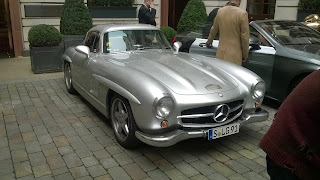 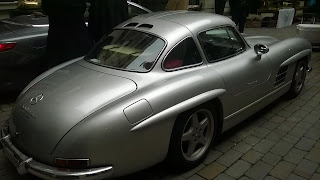 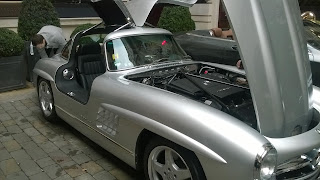 The classic was an absolute beauty.  Originally built in 1954, it is one of only 1200 ever made.  The very charming gentleman has brought it up to date with some modern features and it is worth somewhere in the region of 2 million quid.  I didn't quite manage to sell that much cheese today so just had to make do with admiring it and chatting to the owner - a German collector of Mercedes vehicles who had driven over from Germany yesterday.

And then, apparently, Justin Bieber was staying at the hotel.  Who?  Yes, quite .... Apparently, some singer or other.  Think I am just getting old and disinterested in 'celebrities' ...  There was a quick flurry of people, 2 large cars with blacked-out windows and a young chap flanked by minders ... Out of the back entrance they all went.  The price of fame eh?  Apparently, the police had to get involved a couple of weeks ago when a load of female fans went crazy outside the hotel ..

And the Haas Brothers sculptures are just incredible.  If you have any change left from your Mercedes purchase, why not buy a little piece for the garden? 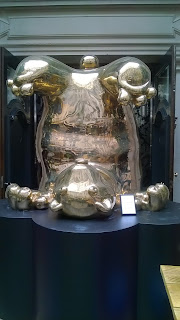 The stalls themselves are very tastefully constructed and I always like to display some of our beautiful kid skins up the sides: 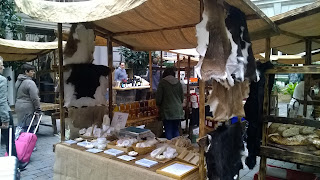 And I always love the stalls at Rosewood .. the most exquisite produce with traders who are absolutely passionate about what they do.  Today, we had a new stall with Turkish coffee.  A small family business which has recently been brought over to London by one of the daughters.  It was a joy to watch them making the coffee, carefully explaining to every customer how to make the perfect cup of Turkish coffee.  And it was rather delicious, I have to say.  And they also had the most beautiful Turkish coffee pots, or cezve, for sale as well .. 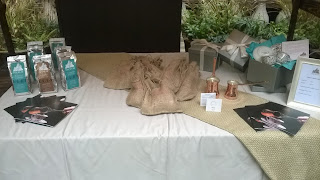 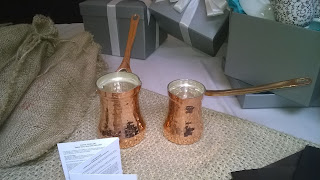 The goat shed is still ringing with the sound of hormonal females in season, all demanding Fenn's attention!  He is doing a good job and has a couple more weeks before we send him back down the road for a rest and bring Huggy Hugo up for his turn with the ladies.

One of our more agile female kids has taken to leaping out of her house to join the milkers.  I think she has been watching Monkey goat too much ..  Mbuzi, also know as 'the small African thing' is a very unusually coloured little goatie.  And she just loves cuddles! 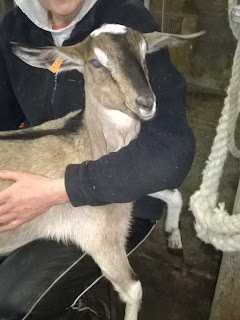 And, as usual, at milking time there is the usual parade of old/retired girlies who like to come in through the back door to enjoy their dinner out of the wheelbarrow.  Here's Mora and Gilly: 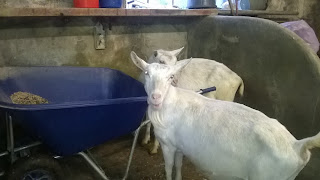 As we have more and more old girls, that wheelbarrow is becoming very popular!
Posted by Ellie Goat at 23:02 No comments: