Excuses for not blogging .. 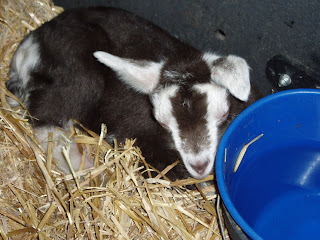 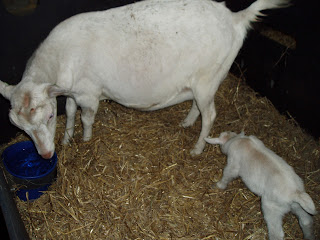 and a couple more.. 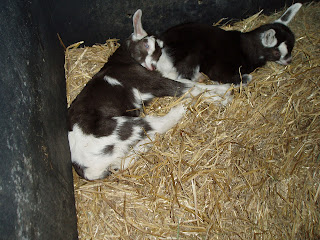 Am I forgiven yet?
So, the past few days have seen a few more babies arrive and everyone, so far, is doing pretty well.
The first group have come away from their mums and are now being bottle fed, whilst the mums are now back into the routine of being milked twice a day.  It's a constantly busy time looking after the new arrivals, taking them to the vet for disbudding (having the horn buds removed) and then training them to feed from bottles.
David took the first lot for disbudding on Monday and I took the second lot on Thursday,  We take them in a large metal cage which fits in the back of the truck or the van - perfect for transporting little people. 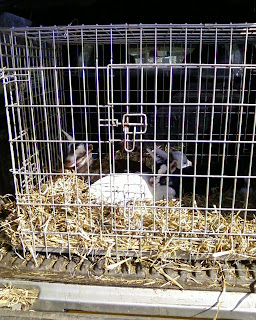 And it was while I was loading them up, that I realised that one of Poppin's multi-coloured babies (brown mum and white dad) is not brown at all, but black!  She has a white sister and I thought that she was just a very dark brown.  But having looked at her more closely, she is actually black! 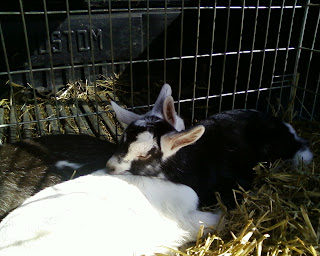 ﻿
So, where does that come from?  Well .. Daramac is her father and his mother is a black goat.  Looks like the genes skipped a generation!

So, I was fully intending to write you a blog on Thursday night but it all went a bit pear-shaped when I went down to feed the goatlings and discovered that Mamakina, the largest black and white girl, had a hugely swollen face.  The whole of her face was just puffed up and tender.  Her eyes were slits, her nose and mouth were swollen and she looked like she had been in a fight!  It had all happened very suddenly and we could not think what may have caused it.  She didn't seem to be in pain but was clearly distressed by the whole thing.  I spoke with Peter our vet and he said that it was probably some allergic reaction, possibly to a sting of some kind.  He suggested that we just keep a close eye on her for the evening, especially to monitor her breathing, but he said that he would expect her to start showing signs of improvement by the morning.

Sure enough, within a few hours, her face started to return to normal and by the next morning she was fully recovered and shouting her head off.  Phew!

So, having ploughed through Friday, I had planned to blog last night.  But Goblin and Foxglove had other ideas.  Goblin (not due til next Monday) decided that she was going to have her baby early and so duly produced a little female around 9pm last night. 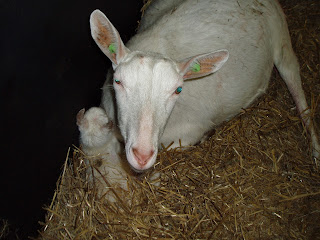 Foxglove started looking a bit preoccupied after milking and so we moved her into her own private maternity ward just as Goblin was doing her bit.  I whizzed out quickly and did my milk deliveries so that I would be back in time for Foxy to have her babies.  So, I came back to the caravan, had something to eat, wrote a quick article for a magazine that had a deadline of this morning and still Foxy had not done anything.
However, she did look fairly imminent and so, rather than get settled in the caravan, I pulled my very comfy reclining deckchair over to her pen and snuggled down in that for a short while.  Many hours later around 3am this morning, Foxy finally got down to business and produced a male and a female - both came backwards, feet first.
Having sorted them all out, given mum a nice long drink of warm water and made sure that both babies had their first feed, I finally got to bed at 3.30am.  Nice ....  Problem was that I had to be up again at 5am to get ready for market!  Sleep is over-rated anyway, I reckon ..
So, you can imagine that I looked absolutely delightful at Balham this morning!
However, more importantly, our tiny man is coming along really well.  Little men don't generally have names but the odd one does seem to acquire one.  This tiny man is now known as Hugo.  He was doing so well, that we decided to put him back in with his siblings and a couple of other friends.  He is SO happy to be back with everyone - he just loves to snuggle up with the others and seems to have found himself a girlfriend: 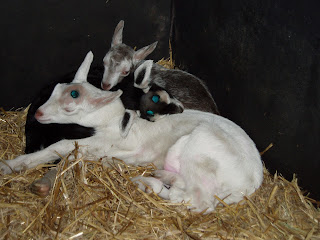 Hugo is the tiny chap at the back.  His girlfriend, about 4 times his size, is the much larger white goat at the front.  He follows her round and can always be found curled up next to her.  Young love ..
Anyway, I am hoping that tonight will be a bit less hectic and I'm back off to the barn in a minute.  Maybe I can catch up on some of that elusive beauty sleep tonight!