An exciting day for all the kids today as we had a bit of a move around.  We are running short on space for the winter and so have decided to move all the female kids to another much larger barn.  After checking all the eartags and making sure that everybody had their feet trimmed, we were ready to go.  It took us 3 trailer loads to move everyone and there was great excitement as they arrived at the new barn and started to skip about.

Unfortunately, I did not get a chance to take any photos today as we were so busy sorting everyone out so I hope to make up for this in the next few days.

We have kept the little male kids in the main barn and also moved our two stud male kids back indoors.  Caffrey and Bramling have been outside with the big males for a few weeks now but, as the little girls moved out today, I thought we would bring them back in with their friends.  However, they are much bigger than all the other little chaps and, obviously, much more macho as they both still have their erm ... manly bits and pieces!  So there was much running about and bleating as they started to chase the smaller kids.

Over the next couple of days David will be mucking out the barns where we had the kids so that we can move the big (smelly) males back indoors ready for the winter.  Once they are back in from the cattle yard, then the Gracie Moos can come back up to the farm.  It's all go at the moment!

Off to a quick market/food festival in the morning at Charing - very local, just a few miles up the road.  Then back to the farm to unload the van and then reload it with a delivery of frozen milk for High Weald Dairy in Sussex.

Time for a cute goatie picture to make up for the lack of photos of the kids moving house! 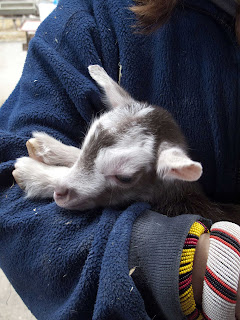 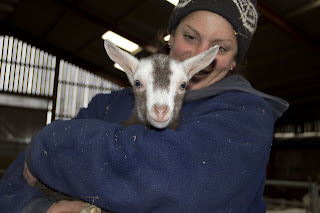