I have to say that there was a distinct nip in the air this morning when I went to milk the goats.  I think that it's only the second time in the past few weeks that I have actually had to scrape ice off the windscreen.  But a beautiful clear and dry morning.

The goats obviously thought so too.  Despite the excitement of having a whole new bale of straw put in for them, most of them decided to make the best of the dry weather and ventured outside into the field for a few hours.

﻿ Gate leads to the yard area between the main barn and the field (to the right of picture).  Building to the left of picture is the milking parlour.

﻿
﻿ ﻿
Pandora checking whether the grass tastes good
So, how many goats can you fit on top of a mound of earth? 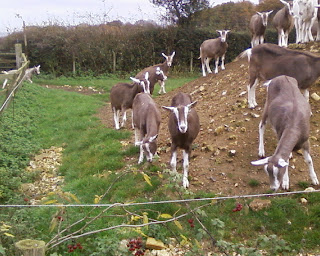 Coming to investigate what mum is up to
Just as an aside, I forgot to include in my Saturday blog that I almost had a close encounter with the Kent Constabulary on Friday night!  One of my occasional milk customers lives down in the Weald and so we arrange to meet at a central point to save us both driving miles.  The place we have chosen is a fairly large car park outside a warehouse that is closed at night - the car park is therefore always empty.  I arrived there quite late on Friday night to find a police car parked up just across the road, watching my customer who was already parked and waiting for me.

The two policemen watched with interest as we both got out of our cars, money changed hands and car boots opened.  Large boxes were moved from van to car and then both boots were firmly shut.  As we got back in our cars, the police car started to move off as well and we were eagerly waiting for them to come and arrest us for dealing in unpasteurised goat's milk.  Great disappointment when the car turned the other way and went off down the road!!
Posted by Ellie Goat at 22:08