JoJo has a boyfriend!

JoJo is our beautiful Anglo-Nubian goatling. 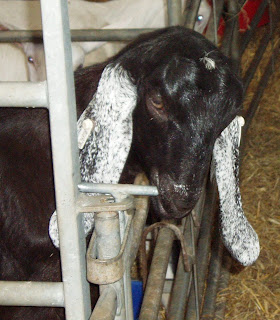 Johari, to give her her full name, is our only Anglo Nubian.  She came to us last year as a kid from one of the top UK breeders.  Although she looks very different to everyone else in the goatshed, she fitted in extremely well and has made lots of friends.  The other kids did look at her a little strangely when she first arrived and many of them were fascinated by those lovely long ears.  But now, everyone has got used to her and they no longer stare at her or chew her ears!

As I got out of my van early this morning and walked towards the barn, I could hear an extremely loud noise.  At first it sounded like someone had their head stuck in something and so I ran to the door and switched on the light only to find young JoJo standing up on the gate, wagging her tail and bawling her head off at the boys in the next barn.

We do not possess an Anglo-Nubian male and, although we could happily use one of our own boys on JoJo, we wanted to keep her kids as pure ANs. So, after milking I immediately called up another goatkeeper some distance away and booked JoJo in for a little amorous liaison later in the day.

However, Friday is my main delivery day and so David drew the short straw of having to load our young madam into the trailer and take her for a little drive.  Apparently she behaved herself impeccably and was rather taken with young Dazzel.  Here she is, meeting him for the first time as he peers over his door at her: 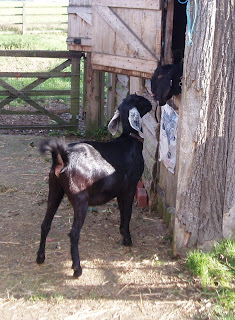 And here is the man himself ... just a kid at the moment but he will grow into a fine big male in a couple of years: 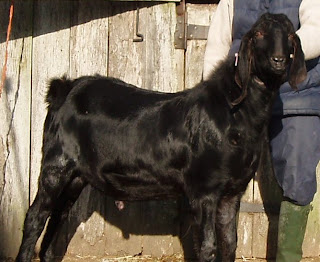 Hopefully, everything will go according to plan and in the spring we will have some small black kids with very long ears!
Posted by Ellie Goat at 22:03