My poor little van ... fully loaded up again this morning to sail up to Parson's Green farmers market.  I hadn't been there before and so it was a whole new experience to find the end of the New Kings Road and the market.  Why doesn't my 2006 map of England tell me that you can't turn right onto Putney Bridge!  Fortunately it was easy to do a u-turn a bit further along the road and then come at it from the other direction.

This is another new market and seems to be doing rather well, judging by the very favourable comments from my immediate stallholding neighbours.  It certainly proved to be rather a good day for Ellie's Dairy and our milk, meat and cheese went down very well with the good people of SW6.  I look forward to my next visit there in a month's time.

Back at the farm, Daramac has decided that he wants to be in the same pen as the other big males.  As I said yesterday, he is separated from them in his own area but the gates that surround him have vertical railings with gaps.  Being a slim chap, he has discovered that he can squeeze through the gap and so he lets himself in and out of his pen as he wishes, using the railings something like a cat-flap!  He squeezes out into the main area, does a bit of bleating and running about, winds Fremlin up a bit, and then squeezes back into his own private house, knowing that the other males are too fat to follow him. He seems quite happy though and the other boys don't mind him - they just seem to view him as slightly odd - 'ah, here's that mad white thing again.  Ignore it and it will go away'!!

I think there must be something in the air at the moment as we are having all sorts of naughtiness in the milking parlour as well.  Tonight we managed the '13 goats to a parlour' routine again as Dolores and Winky managed to jam themselves into the same stall.  Here they are in the centre of the picture - Winky is the brown goat to the left and Dolores is the black goat to the right. 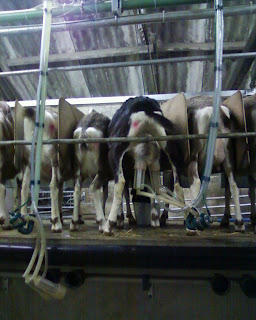 And yes, if you were thinking that the name 'Winky' sounds familiar .... Winky is the sister of Tinky who has also appeared in our blog.  She is the small naughty goat who turns round in the parlour to face the wrong way.  As you may gather from the picture above, Winky is also a small naughty goat.  I think it runs in the genes as they both bear a striking resemblance in looks and character to their mother Cobweb.  I blame the parents ...

And due to popular demand ...  more small goatie pics! 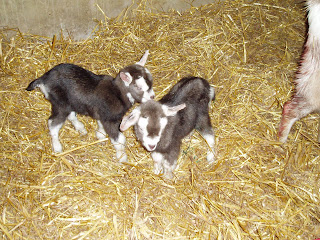 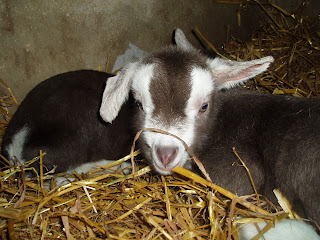 But bear in mind that small goats grow into large goats ... One of those tiny people above grew up to be our first 'head boy', my beautiful Shaggy. 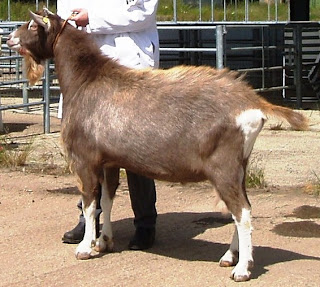