The problem with snow is that it doesn't stay frozen forever. So, spare a thought for Jane the Cheese who wandered out to her dairy yesterday morning to find torrents of water flowing out of her maturing room. And the cheese room. And several other places. Poor Jane the Cheese. Having located and fixed the burst pipes, the mammoth cleanup operation started. Hopefully, not too much damage there.

Meanwhile, at the soft/goat cheese making plant we also had a couple of minor bursts but, having suffered badly a few years ago, we now take the precaution of leaving fans running and turning the water supply off when we leave the place overnight in the winter. Lucky lucky lucky .... One of the bursts blew the water meter off the wall, but hardly any leaks. Lucky. David managed to mend the pipes pretty quickly and so we were up and running and making cheese by 10.30am. Hurrah!

And then last night it started to rain and this morning all the snow has gone! Looks like someone has been over my garden with a hoover and taken it all away - not a spec left. Must admit that it's nice to see green again! 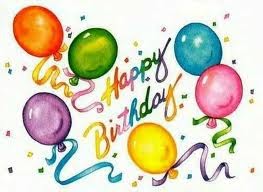 So, it's a Happy Birthday day today (as well as being a Happy Valentine's Day). Firstly, my dear Auntie Celia is 87 today. And then, it is also the 1st birthday of Valentine (guess how she got her name?!) who was our first live born kid last year. So, she is now officially a goatling! Big grown up girl that she is ... I tried to get a picture of her this morning but she was having none of it .. nice blurry pic! 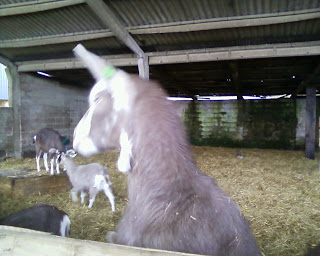 So, as you see, we are a couple of weeks later starting to kid this year. Just as well, as our assistant goatherd Francesca, has decided to go swan off back to the Gambia for 2 weeks sunshine! No dedication ... She has given instructions that none of the goats are allowed to give birth until she gets back - especially her beloved Footsie goat!

And, to continue the excitement of last week's visit from the Taste of Kent Awards team ... tomorrow we are receiving a visit from the directors of BBC CountryFile.  Apparently, they are coming to film in Kent in the next few weeks and may want to come and do some filming with us.  They are on a scouting mission tomorrow to visit various potential filming sites so that they can decide where to send the crew.  So, we may or may not be on TV again but watch this space!
Posted by Ellie Goat at 15:34