Those of you who have been following our blog for some time may recall that we were voted into the Top Ten in the Taste of Kent Awards Artisan Food Producer category.  Well, what you didn't know is that Jane the Cheese and ourselves have also entered a couple of the other categories that are selected by a judging panel.  And, although you may accuse us of blowing our own trumpets, we would like to announce some success!!!

And, as for us humble goatkeepers .. well, tomorrow we are receiving a visit from the eminent judges of the Kent Food Farming and Landscape Award, as we have been deemed interesting/special enough to warrant further investigation!  Not sure how many of us are in the final but we will try and find out a bit more tomorrow.  Wish us luck!

And, finally, our friends Sarah and Mark Hardy at High Weald Dairy in Sussex have received the coveted title of 'Sussex Food Producer of the Year'.  Well done!

Anyway, enough back-patting .... What about those goatie girls and boys? 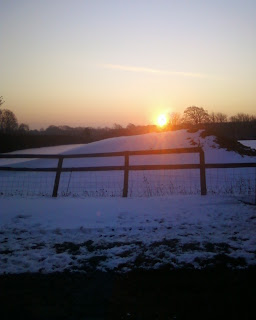 Unfortunately for our youngest bull calf, we had a visit from our vet in the afternoon.  Peter was on site to perform a necessary little operation on the young chap as we had not been able to fit a castration ring on him when he was younger ... I don't think you need the details or any photos, but I leave it to your imagination.  Quick and relatively painless ... and now he sings soprano.  Poor lad.

Today saw a quick trip to High Weald in Sussex with a vanload of frozen milk.  The main roads and motorways were clear of snow but the little country roads made for interesting driving in the ice!

It's always interesting trying to get round our regular doorstep deliveries in this weather, as all of them are in neighbouring villages not served by main roads.  One delivery this morning would have proved too much for my little van so I nicked the truck to make sure that I had enough grip to get up and down the icy hills.  Just as well I did, as there was no way I would have made it in the van.  I did manage to get stuck on one occasion last year and had to call David very early in the morning to come and pull me out.  Think I had been a bit over-optimistic when faced with a series of snow drifts!

The goats stayed firmly indoors today as it was pretty miserable and there were some snow flurries drifting about.  Kitty found that the best place was right on top of the hay rack: 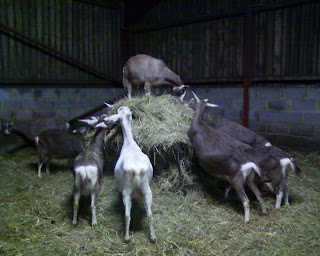