When I went to feed the youngsters yesterday morning, I got to thinking about how much they have grown and how, very soon, they won't be the 'babies' any more!  Watching them tucking into their food and run about, I was reminded of when they were small and how we struggled to keep some of them alive and healthy.

Look at them now!  Watching me climb over the gate with their breakfast: 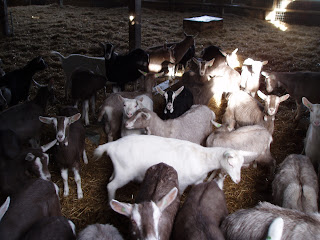 As with all kidding seasons, we did have a few traumas last year, but most turned out well in the end.  Here's a couple of stories for you: 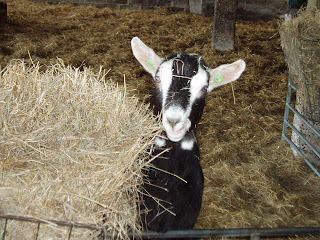 This is Stevie now.  First time mum Cerys had a really difficult kidding with Stevie's twin being born dead.  Little Stevie was very small and frail when she was born and Cerys really struggled to look after her.  Mum and baby both needed a lot of love and attention.  You can see just how tiny she was from this photo: 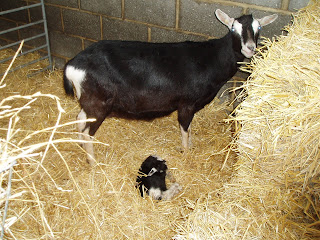 Once little tiny Stevie was up and about, we quickly noticed that there seemed to be something wrong with her eyes.  Closer inspection showed white cataract-like films over both eyes and we assumed that she had been born blind.  No wonder she was struggling!

When David took her for disbudding at a few days old, our vet checked her out and said that it looked like her eyelids were growing inwards - they were scratching the eyes and this was what had made them 'blind'.  Quite common in sheep apparently, but not so usual in goats.  Solution - inject the eyelids with a type of botox to plump them up and bring them away from the eye.  If this didn't work, there was something else that he could try.  But he was hopeful.

And, indeed, after a few days, her eyes slowly started to improve and she came along in leaps and bounds.  She has grown into a cheeky little person and now has no problem at all with her sight. 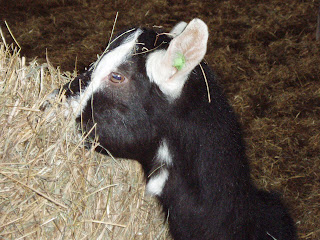 And then there was Tattie.  She was one of twins born to Tinky goat.  Remember Tinky?  The little naughty brown goat who turns round in the parlour? 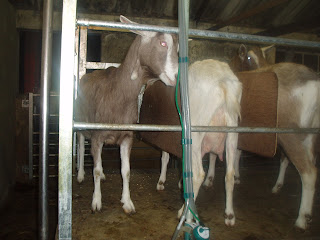 Well, she had twins on the same day as her sister Winky also had her twins.  As they always spent time together, we put both mums and all the babies into the same pen.  For some reason, Tinky did not like Tattie at all and refused to feed her.  She would happily feed Tattie's little brother but when Tattie tried to feed, she would bite her until she ran away.  That's how she got her name - she had bits of hair pulled out and nibbled and looked really tatty!

Fortunately, Winky was a bit of an Earth Mother and was quite happy to feed all the babies.  We had to get Tattie away from her mum and put her over to Auntie Winky for her meals.  Good old Auntie Winky!

And here is Tattie now ... beautiful and well grown.  She shows no sign of being traumatised by her experience with Tinky! 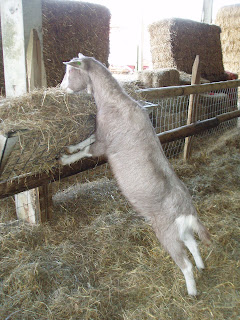 And, finally for today - Faye and Teasel.  Otherwise known as the 'Cilla goats'.  They were born to young Cilla and although they were well looked after by mum, they didn't seem to thrive.  They needed a lot of attention and remained on extra milk feeds for much longer than other kids the same age.

Before we had decided on proper names for them, Francesca and I used to call them 'the Cilla-goats'.  When you needed them to come out of their pen for feeding, you just called 'Cilla goat! Cilla goat!' and both of them would come running to the gate.

Seems that all our hard work paid off - here they are now: 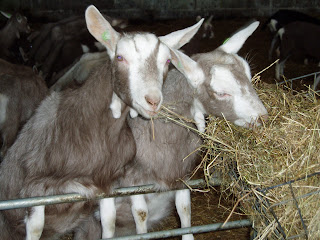