As it was a bit chilly again today I decided it was time to test drive a pair of my Xmas socks when I went out delivering: 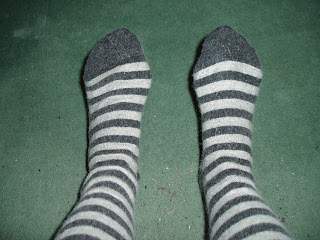 Angora and wool - gifted by Jane the Cheese.  So far, so good.  Lovely and toasty!
As predicted, a short delivery day today and the traffic was thankfully very light driving up to South London and back.  My furthest delivery spot is Franklins Farm Shop in East Dulwich - a small but VERY nicely appointed shop that specialises in seasonal and British produce, sourced as locally as possible. 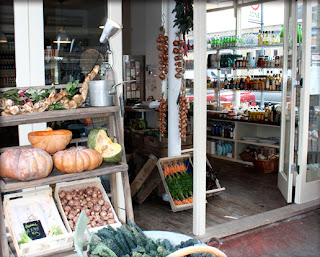 It's always a job to find somewhere to park nearby and I have had several run-ins with the local parking attendant.  However, so far, he has been a very nice man and let me off both times he has caught me parking on a double yellow.  But I figure that I can't push it too much and so recently I have been driving round and round in an effort to find a legal space!  Today I was lucky and managed to park right in front of Franklins, so I thought I would take the opportunity to buy my fruit and veg in there, as I haven't got the luxury of my farmers markets this weekend.
So, what do you do with a Jerusalem artichoke?? 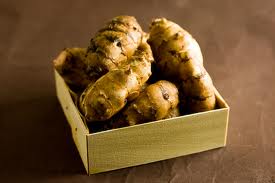 They always catch my eye but I have never been sure what I could do with them.. Grasping the bull by the horns, I bought a handful today and have luckily found a recipe for artichoke and chicory gratin .. sounds yummy, so will give that a whirl over the weekend.
On my return to the farm, yet again I found a lot of very lazy fat goats lying around.  Some of those young goatlings are starting to really look pregnant now - when they lie down, those huge fat tums just spread out: 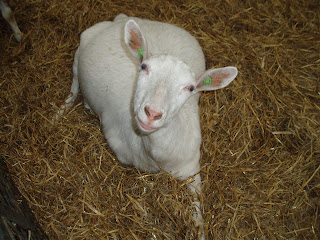 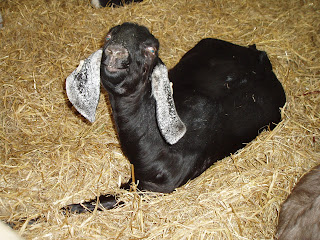 The beautiful Johari - known to her friends as JoJo
If the pregnant ladies do not dry themselves off ready for kidding, we have to encourage them to stop producing milk so that all their energy is channelled into making themselves and their kids strong.  We try and dry them off at least 8 weeks prior to kidding and so are now starting to look at the early deliveries.  Some have dried off already (Foxglove and Footsie always get lazy in the winter and prefer to lie about eating hay rather than coming into the parlour for milking!) and others are well on their way to being dry.
Those who have been dry for a while automatically move to the non-milking side of the barn at milking time but the 'newly dry' are not yet in the habit and have to be moved across by the humans.  As milking time can be rather busy, the best way to identify your goats is to spray a red mark on their backside so that you can spot them from a distance and separate them off.
Here's Moonstar sporting a red rump - not very glamorous but it helps the humans! 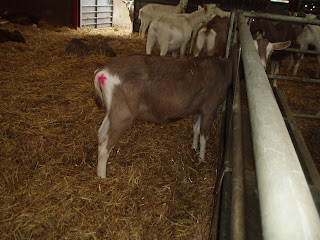