Looks like all my boys have done their jobs again this season and everyone is going to be a daddy, including our new little men Bramling and Caffrey.  Well done boys!  I was particularly thrilled that Fremlin is going to be a dad again - I wasn't sure that he was up to the job this year, given the problems he has had with his back legs, but seems that I underestimated the old chap!

Michael came and scanned all the pregnant ladies this morning and it looks like we have over 120 kids due at the moment, with a few girls still to be scanned and confirmed in a few weeks.

Here he is scanning Dipsy: 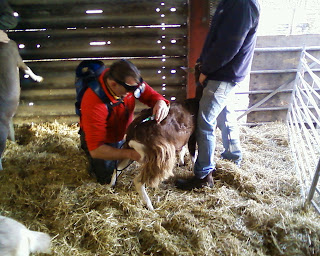 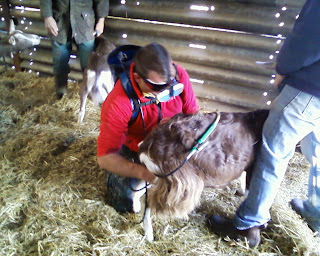 When scanning the goats, Michael wears a backpack which holds the equipment and a set of special glasses in which he can see the scanned image.  The scanning head is run under the goat's stomach - there is no internal work like you get with cows!  When he is working in the field and scanning hundreds of sheep, he views the images on a large TV screen instead as it is easier and much quicker when dealing with large numbers.

Michael is very experienced and can tell us how many days pregnant the goat is, how many kids she has and whether they are viable or not.  Occasionally, for example, he will say that he can see 2 kids but 1 looks like it may be having problems.  We then know to keep an eye on that goat and we can also have her rescanned a few weeks later.

So, our big stroppy white girl Moyra will kick off the 2012 kidding season on 28 February or whenever she decides that the time is right.  She will be closely followed by several more within a few days and then we get really busy towards the middle of March.  So far, noone has been scanned for quads this year but we do have 5 sets of triplets due.

I was also delighted that some of our older girls are in kid - Flora, Betty and Wilma will all be 8 years old next year and Tammy (at 9 years old) is also due to have twins. This may possibly be the last time that these girls will be kidded but we will see how they all get on next year.

And Ginger goat?  Triplets.  Do you think that will stop her trying to climb over gates and squeeze through gaps?  Probably not.
Posted by Ellie Goat at 22:11