Remember Ginger, the goat who likes to climb over the gates? 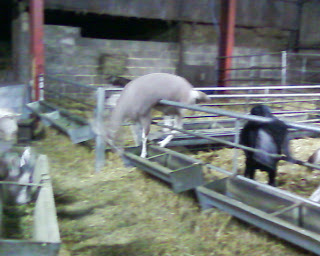 Well, since David mucked out a couple of weeks ago, she has been a bit miffed.  As the straw level went down, so the corresponding gate level went up and poor Ginger can no longer quite reach over.  David was pleased that he had put a stop to her naughtiness but, as I suspected, she was just biding her time before she found another interesting way to wind him up.

Last night we had Ginger in the parlour 3 times.  The second time, I thought that my goat recognition ability had failed me and that it must have been a different goat that had already been in.  Strange that she didn't have a lot of milk though, but nothing really unusual as Ginger is a 'maiden milker' and so doesn't produce enormous amounts.  However, when she appeared for a third time, along with several other goats who seemed already to have been milked, we realised that something was not quite right.

As the goats left the parlour and went down the ramp, David went outside to watch what was going on.  Sure enough, young Ginger goat pushed against the gates at the bottom of the ramp and let herself back into the 'milking' side of the barn.  Then she ran along to the parlour entrance gate and stood waiting to come in.  Again.  Swearing under his breath and armed with various implements, David secured the gates in position thinking that would put an end to it.

And so, to milking this morning.  Ginger came in and went out with the other goats.  As predicted, she pushed against the bottom gates but found, to her disgust, that she could no longer move them.  David smiled smugly and came back into the parlour.  As he opened the entrance gate, there was Ginger waiting for him!  Not to be deterred by an immoveable object, she had jumped over the gate and let herself back in again anyway!!  David knows when he is beaten .. I think he has given up any hope of ever keeping Ginger in where he wants her.
Posted by Ellie Goat at 22:54