GeeGee the Parrot gets her own blog!

Seems that Sara was so impressed with our Ellie's blog that she has decided GeeGee parrot should have one too.  GeeGee has many friends and admirers, not least in Sara's office, and so it is only natural that everyone would want to read about her.

So, if you fancy a change from goats, go to http://www.geegeeparrot.blogspot.com/  to read GeeGee's Parrot Tales.  Very entertaining they are too .. 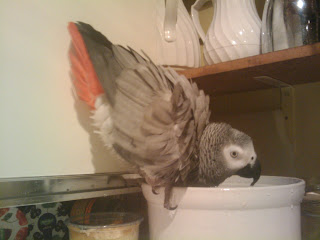 In the world of goats it was a relatively uneventful day apart from the two HUGE bales of new straw that were rolled into the milkers pen this morning.  The weather was threatening to be a bit rubbish today and so the girls were showing absolutely no signs of wanting to go outside at all.  When I looked in later during the morning there were a lot of very comfy looking goats just lazing around in their new beds!

They were certainly very glad of it after milking tonight when we had a sudden storm of gale force winds and sleet, just as the last two goats came out of the parlour.  I've never seen Minnie and BammBamm move so quickly! Down the ramp, across the barn and in through the gate so fast it made everyone else jump and snort with surprise.  I braved the elements to shut all the gates quickly and then we were all snuggly and warm for the night.

Tomorrow will be a short delivery day as many of the farm shops are still closed - gives us a chance to (hopefully) build up some cheese stocks in time for markets later in January when the milk yield is really going down!
Posted by Ellie Goat at 22:05