What a glorious sunny day!  Blue sky and lots of sunshine.  Must be summer ...

Perfect car-washing weather ... Having spent most of yesterday afternoon hoovering and washing my little van in preparation for the MOT today, I spent another few hours cleaning David's truck this afternoon so that I can give it back to him relatively clean and tidy.  You know what men are like about their vehicles ... And the good news is that my van is MOT'd and back on the road.  Hurrah!!! Much as I enjoy driving the truck, my little van is much more practical and I can whizz around in it for a fraction of the fuel.

Some of the goaties were out enjoying the sunshine this morning and the little boys were all piled up together trying to get the warmest spot: 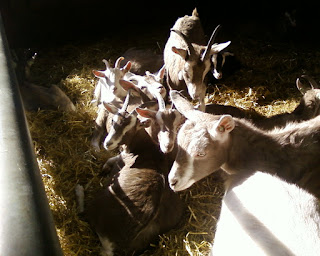 One of them was obviously in disguise for some reason, wearing a mountain of hay on his head: 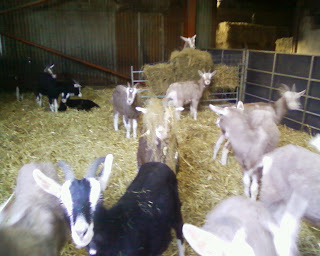 Not sure what that was about but he seemed quite happy!

But we have a sad goat at the moment - young Valerie goatling: 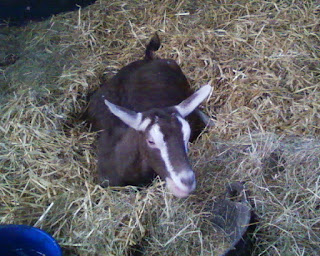 Followers of our blog may remember Valerie from last year.  She damaged one of her front legs and Peter our vet thought she may have dislocated it.  I took her in to the surgery to have it x-rayed but nothing strange was found.  However, it never went back to normal and she has always had a slightly odd front leg, though it doesn't seem to hurt.  She tends not to use it very much but hops around on the other 3 legs and uses that as a spare one.

However, over the weekend, I think she must have knocked her bad leg as she was really struggling to move around and kept on sitting down all the time.  She was reluctant to let me feel her leg and seemed to be very unhappy.  We gave her some painkillers and moved her into a little pen on her own to give her more space.  Peter has checked her out this morning and thinks that she has damaged the elbow somehow as it is quite hot and swollen.  So, more painkillers, lots of rest and piles of treats and TLC! 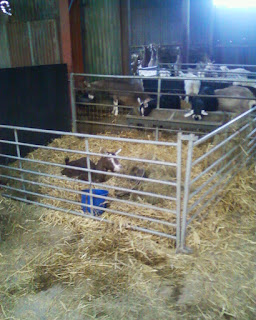 We have made her a pen right next to the other goatlings so that she can see them (after all, she has 2 sisters in there) but she has her own hay, food and water without having to struggle.  Goats are not very tolerant of weak or sick animals and so she would get pushed around by the others if we left her in the main area.  Also, as she only has a couple of weeks left until she has her kids, she needs to have as much chance of recovery as possible. I suspect that she may stay in her own little pen until after she has kidded but we will see how she gets on.

She seems much more comfortable now and was happily stuffing her hay when I last saw her!
Posted by Ellie Goat at 15:57