Another change to the routine

Goats are little creatures of habit and they don't take kindly to having their routine changed.  Especially when it involves food.

With only a few weeks to go until kidding starts, it is important that we get the feeding right for the dry goats, the very pregnant goats and those who are still milking.  Although they all have the same food, they require different amounts and so we have had to change the feeding system to make sure that everyone gets what they should have.

The dry goats who were still coming through the parlour have now been stopped.  Much to their disgust.  Not happy.  Not happy at all.  David, of course, is overjoyed as most of them were those naughty little brown goats who used to jump off the platform and dive into the wheelbarrow.

So, only around 20 goats are coming through the parlour now and we have set up a separate smaller pen to collect them: 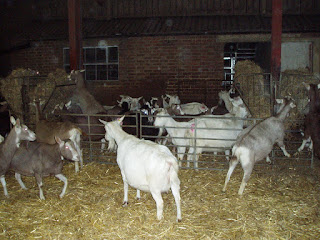 Everyone else is then fed in the troughs around the edge whilst those who come through the parlour get extra large helpings for still giving us milk!

However, some goats are not happy at being excluded from the parlour.  Do you remember Shares?  Our recently acquired girl from Somerset who had a habit of leaping over gates?  Well, seems that she is unhappy at not being able to come into the parlour any more.  She waits at the fence for David to let the first lot of goats in and then she just calmly leaps over the gate and waits to come through with the second batch.

Now you see her: 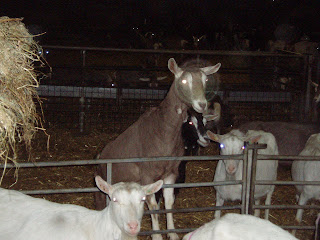 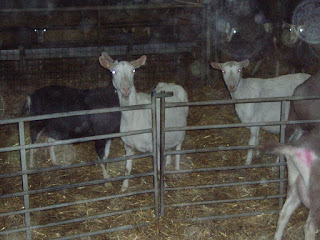 David wasn't quick enough to catch her in mid flight but we will try again tomorrow!!
Posted by Ellie Goat at 20:12