Well, with the mating season almost at an end, it was time to move the big boys around again this morning in preparation for some larger moves planned for the coming weekend.

First of all we brought Max and his ladies back into the barn from outside in the cattle yard.  Everyone inside spotted them straight away and so there was a bit of fighting as they all got back together.  Max will stay in with the ladies for the moment to catch all the stragglers who haven't been mated yet.  He was totally at home with over 100 girls around him!  Just takes the whole thing in his stride.  Here he is having dinner with a few of them: 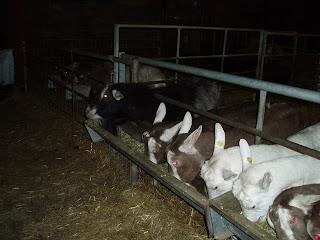 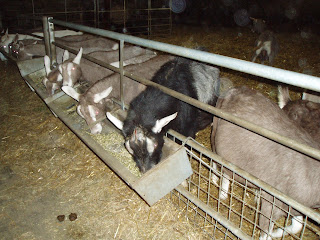 Then we moved Fremlin and Beamish in together as they have finished their work now but we like to keep the boys in the main barn for the winter if we have the space.  It is warmer for them and they like to be with everyone else rather than outside where they can't see what is going on!

I expect those two will be snuggled up together tonight as they are very good friends. 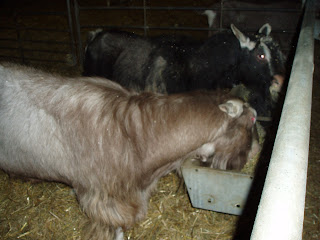 So, the cattle yard is now vacant which means that David can bring the Gracie Moos back up to the farm for the winter - the grass is getting a bit short and the weather is starting to turn so best to get them into the yard where we can keep an eye on these new little calves as well.

Milking time was interesting as all the girls who had been outside with Max for a few weeks insisted on coming through the parlour, even though they are all dry and don't need milking.  It means they get a bit of extra food though!

Betty, on the other hand, stayed over the 'dry' side of the barn and then strolled round to the back gate of the parlour where she waited patiently to be let inside.  Just a little snack to keep the strength up .. 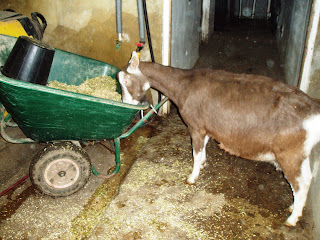 And finally .. Katherine and Jess sent through a couple of photos of our little man in his new home.  Here he is with his new friend Socks and one of the girls: 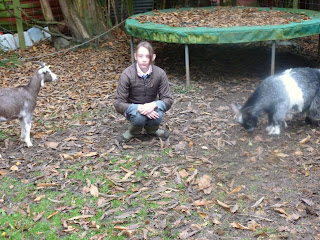 The girls have decided to call him 'Toggy' (as he is a British Toggenburg).  Think it suits him!  They were also a bit concerned that he might get cold over the winter so convinced mum Pauline that she needed to buy him a proper goat-coat.  And here he is looking very smart: 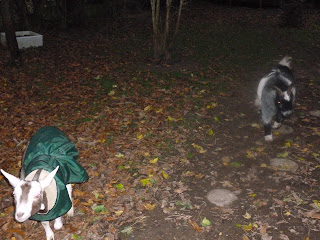 I think he will probably be the most spoiled little goat in Kent!  He is a very lucky boy to have such a nice home.
Posted by Ellie Goat at 21:39