Has everybody got one?

Four big Gracie Moos.  Four little baby calves.  Oh yes, and the fifth young Gracie Moo who is just a teenager and not old enough to have babies of her own just yet.

Tuesday evening was bitterly cold and very windy and as I did the final check on the cows as I closed up the back door of the goat barn, I could see that the oldest and largest Gracie was sitting at the back doing a bit of huffing and puffing.  David climbed in to have a closer look and came back out to confirm 'yes, we're having babies'.

So, I went off on my evening deliveries and David stayed with Gracie for her delivery.  And I have to say that it was quite a novel experience for me to be tucked up warm and cosy in bed later on whilst he was out in the weather waiting for babies to arrive!  I figure that he has to do it once a year to make up for all those freezing cold nights that I spend running out to the goats in my pyjamas during kidding time!

And here she is - the final baby of the year: 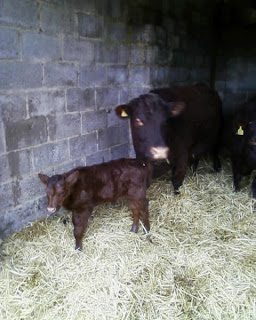 So, as last year, a nice balance of 2 bull calves and 2 heifer calves.  Well done Gracies!

During all the moving around of the past few days, one of the feed bins has been emptied and is currently lying on its side waiting to be moved into place and refilled.  Ginger was very excited when she spotted it as she thought it would be an easy way to get food. 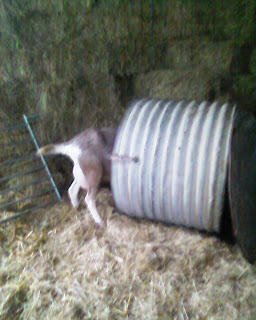 Poor Ginger.  The look of utter disappointment on her little goatie face was something to behold.

And, talking of goats in bins .... here's another one: 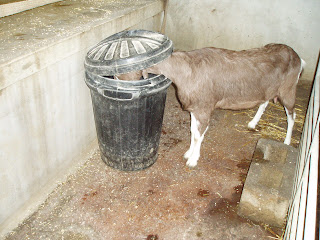 This is young Ellie in the milking parlour.  She jumps off the ramp, runs round to the feed bin and lifts up the lid with her nose so that she can stick her head inside.  She is such a naughty little goat - I have warned her that if she continues to behave badly, we shall have to change the name of the dairy!  Don't think she cares much.

And so to bed ...  This was Beamish and Fremlin fast asleep this morning. 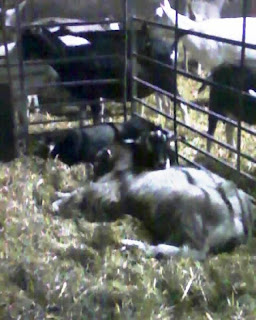 Beamish is snuggled in the corner whilst Fremlin is sprawled out right next to him with his head on Beamish. Even those big smelly boys need someone to snuggle up to on a cold winter night!