This morning in the sunshine

Well, the weekend of markets came and went - fortunately without too much in the way of weather.  There's nothing worse than unloading and loading a van when it's pouring with rain.  I think we were pretty lucky really as yesterday as pretty horrendous again here.  Lots of sad little goatie faces staring out at the mud and rain ...

But today the sun came out and although everyone was a bit reluctant to venture outside too far (lest they get their little feet wet), they were enjoying the warmth of the sunshine.  Tammy, our oldest girl, had plonked herself firmly in the best place to soak up a few rays: 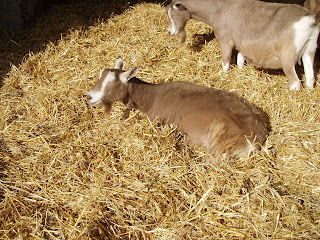 Max was busy looking after his ladies out in the cattle yard: 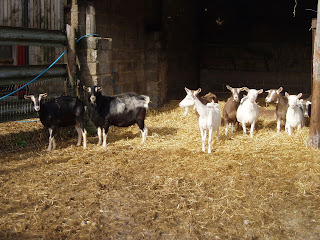 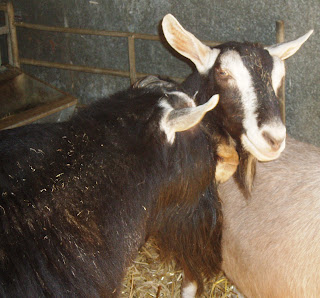 Max is very possessive of his special ladies and will always make sure that he stands between them and any interfering humans who have the audacity to venture into his area.  He is fiercely protective and gets very upset if you should even dare to try and take one of the girls away from him!

The babies were all up and about, jumping around this morning.  I always find it very difficult to get decent pictures of youngsters as they always want to see what you are doing and never keep still long enough!

Some of the little boys came to see me: 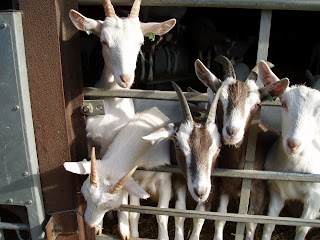 And two of the prettiest girls (yes, I know, they are all pretty ...).  Renata is especially beautiful - grey and white: 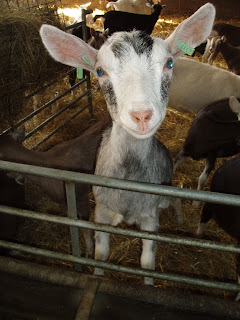 She is the daughter of two white goats but one of the grandma goats was black and white and I think some of the genes have skipped a generation to come out again in Renata!

And this is young Lois.  A cheeky face if ever I saw one! 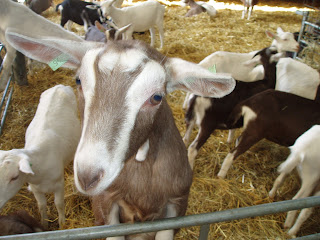 And the beautiful Cleo: 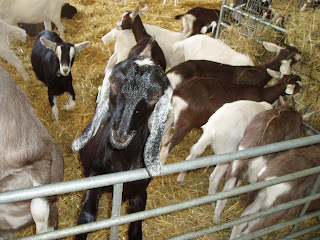 While I was wandering around with camera in hand, I also got a couple of 'update' photos.  How about this one of Siouxsie?  Remember the acupuncture treatments that she had to try and sort out that droopy ear and one cheek constantly packed with food? 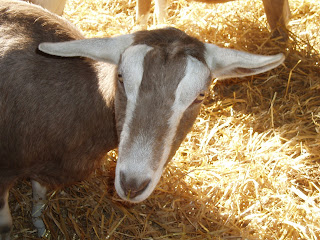 How lovely does she look now?!  In great condition and bossy as ever.  She had a year off last year whilst we let her recover from a very serious illness that almost killed her.  It would have been so easy for her just to give up and die but she fought every step of the way.  So we owed it to her to give her a chance.  And she grasped it with both hooves and is now looking just fantastic.
And I'm not sure that I have ever introduced you to the 'new' Ellie.  Here she is ... small, brown and exceedingly naughty: 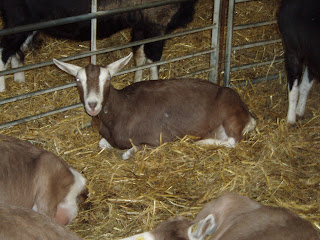 Little Ellie is the granddaughter of our original Ellie after whom the dairy is named.  So, she carries on the name ... though, sometimes she is so badly behaved at milking time that I threaten to change her name to something else.

And finally - Beamish and Fremlin have had a couple of quieter days with only a little attention from the girls.  Though it looks like Beamish might be busier a little later as Magenta was eyeing him up earlier today: 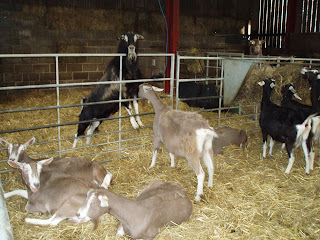 And here he is, talking to his mum Cilene. 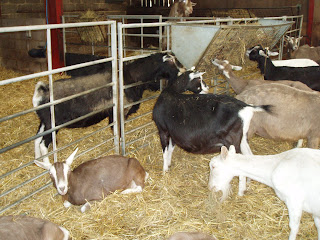