That's what I like about English weather .. you're never quite sure what it will do next.  Having had 4 days of solid dreary fog with quite warm temperatures, we arose this morning to find it barely above freezing and with a biting north wind.  And so, thermal t-shirts and hats were the order of the day.  For both goatshed and Wimbledon market!  But at least I didn't have to drive through snow to get to market like some of the guys from East Anglia.  Apparently the M11 was a complete nightmare!

The sudden drop in temperature last night also seems to have kick-started a lot of those goatie hormones and, as I approached the barn in the dark this morning, all I could hear was the yelling of girls in season.  Beamish and Fremlin already had a number of ladies for sleepover last night but this morning I opened the door to find two of the female kids had jumped out of their pen and were leaning over Beamish's gate wagging their tails and fluttering their eyelashes.  Far too young for that kind of thing!  A stern telling-off from mum and they were put back in their own house.  Didn't stop them standing on their fence and yelling across to the boys though.  What a racket!!

And one of the little black men has taken to jumping out of his house and running about the barn when we are around at feeding times.  He loves to jump up on the big bales of hay: 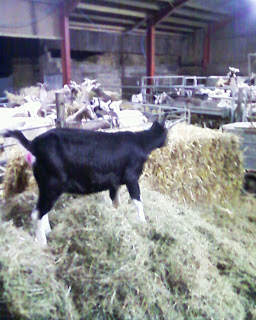 Difficult to tell him off though as he is such a sweet little man.

And while we are on the subject of creatures jumping on things ... David snapped this picture of Ben earlier this week.  Hideous damp foggy day .. you would expect the dogs to be curled up all snuggly inside their kennels.  Or at least, in their bed.  So can anyone explain why Ben decided to fall asleep on top of his kennel?  Looks really uncomfortable to me! 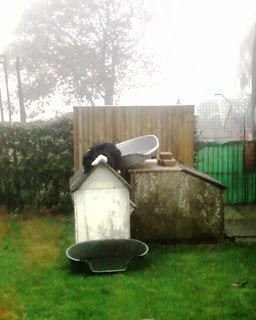 As I arrived yesterday at Franklins in East Dulwich I was met by a large snake on one of their coffee tables.  How about this for a butternut squash? 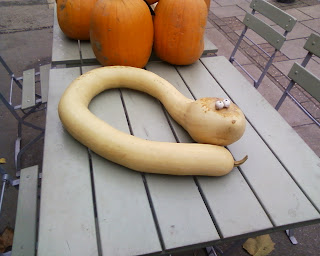 Came from a friend's garden apparently.  Glad I'm not the one who has to peel the thing!