Now here's an interesting picture for you - taken during milking this morning: 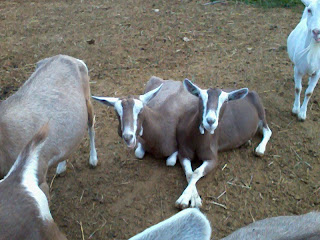 Just looks like two goats lying around outside ... But it is interesting for two reasons ..

The goat on the left is Siouxsie.  Remember Siouxsie??  The girlie who had acupuncture on her face to try and get her tongue and jaw working again properly after being so ill ...  How good does she look now?  Both ears up and chewing away without packing the food in her cheek like a hamster.

Siouxsie had been lying in the yard after milking, along with a good number of the other goats.  After a while, the goat on the right walked over to her, rubbed her head against Siouxsie's neck and then settled down very close to her.  She could have lain down next to her sister or one of her many friends but she made a conscious decision to lie down next to Siouxsie.

Not quite believing my eyes, I climbed over the gate and went to check her ear tag number.  Yep ... I was right.  This was Diana, one of Siouxsie's triplet daughters, born in 2011.  She had snuggled up next to her mum.

So why is this so remarkable I hear you ask ...  Well, bear in mind that, as a dairy herd, we use our girls for milk.  This, means that we take the kids away from their mums after a few days and feed them all by hand as the mums come back through the parlour for milking.  So, the kids only have 4 or 5 days with their mothers.  Barely time to get to know them well, you would think.  Yet Diana clearly recognised her own mum Siouxsie more than 2 years later.  I just find it incredible.