Toads in search of shelter

I know it's wet but this is ridiculous.  Even the toads are fed up with the rain!  Meet the newest inhabitant of the goat shed: 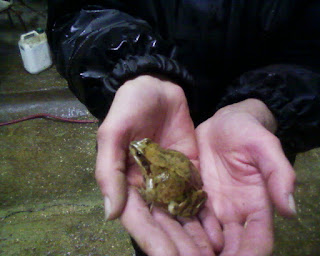 I found him toddling around on the floor this evening completely oblivious to the fact that Ginger goat was about to step on him.  I whisked him away from her prying little goatie nose and put him back outside in a nice damp bit of grass.

What rubbish weather!  It was absolutely tipping down this morning when I went off to Wimbledon market and I don't think it stopped all day.  But they are a loyal bunch in Wimbledon and so the market was as busy as usual despite the weather.  We had a small group of enthusiastic carol singers entertaining shoppers as they arrived and even the market cow had got into the festive spirit: 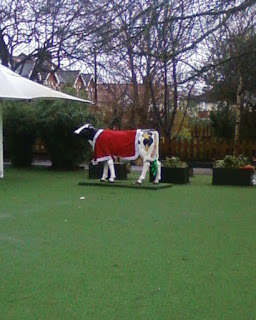 I was quite pleased that the world didn't end yesterday as predicted by some but I was rather taken by the rather unusual time on the clock in my van when I was out delivering on Thursday night: 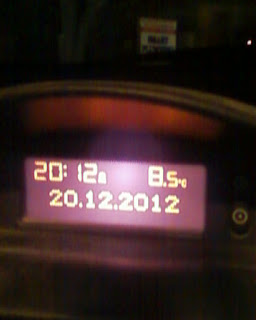 Don't see that every day do you?!

Thursday morning was a bit traumatic for our little calves as the vet came to do some dehorning.  But they did have a bit of fun first as we had to separate them off from their mums and move them into one of the barns to await the vet.  They are such strong little creatures and the larger of the boys landed a well-aimed kick on David's leg which sent him sprawling in the mud.  I didn't laugh.  Much.

But we did get them all without too much trouble and they only had a few minutes to wait before the vet turned up.  Look how much they have grown! 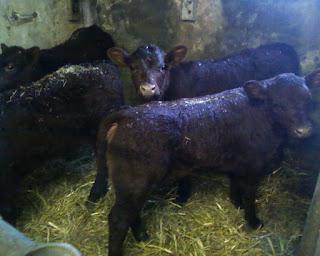 Meanwhile, in the goat shed, Max has just gone back in with Fremlin and Beamish 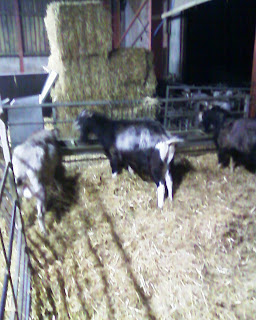 There was a bit of manly pushing and shoving but it was all just for show.  They are all good friends and I think that Max will enjoy a bit of male conversation this evening.  It will be nice when we get Daramac back from Margate after Xmas and then all the boys will be back together for a while.

And finally - that little teaser I set on the last post: 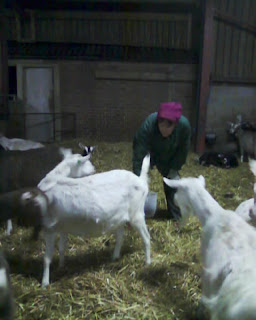 Well, Sue was getting warm with her idea of goat poo.  In the picture, I am holding a jug right behind a goat in order to catch some nice clean poo before it landed on the floor.  Then I put it all in a bag and took it to Winterdale Cheesemakers ... As last year, Carla and Robin wanted to make their young children believe that Santa had been to the house with his reindeer.  And, following the success of last year, they planned to sprinkle our 'reindeer' poo along their drive and outside the house.  Worked a treat last year but we will see what happens this year!