And we're off!  Mating season kicked off today when our new girl Shares decided to flutter her eyelashes at the boys.  Of course, there may already have been several goatlings doing the same thing but I haven't noticed any of them making eyes at Larkin or Daramac yet - though sometimes goaties can be very secretive about these things!

Shades and her goatling daughter Silver are inseparable and as we intend to mate both of them to Fremlin, I have penned them all off together for the night.  And then at milking time, Margot goat decided that she wanted a slice of the action as well.  So tonight my dear old boy was enjoying his dinner with three lovely ladies: 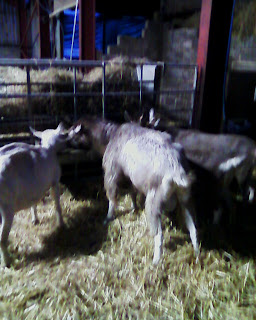 At almost 7 years old, Fremlin is getting on a bit for a working male.  You may remember that we had a course of acupuncture for him last year when his back legs started to be a bit wobbly.  He seems to have recovered exceedingly well and he only stumbles on the odd occasion now.  I was intending to give him just a few of the older ladies (who can't run fast and won't pose too much of a challenge!) but with the 3 other lovely brown boys gone to Somerset, Fremlin may well be far busier than he expected.  I'm sure he won't complain though!

Whilst I was out delivering today, David was busy mucking out half of the main barn so that we can move babies around and get the other two males in and working.  We had to move all the babies out into the hay barn so that the tractor could get in and it was very exciting for everyone to move house this morning.  There was much running about and bleating.

We have had the kids in 3 groups so far - it's only when you put them all together in the same area that you realise just how many babies there are!! 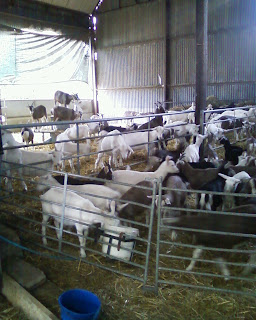 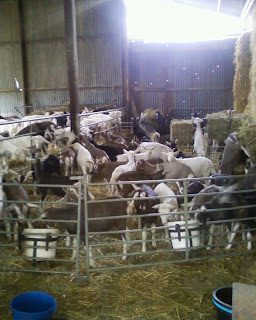 If the weather holds out, the other side of the barn will be done tomorrow and then we can start getting the girls sorted out ready for mating.  Poor Beamish and Max are all alone out in the cattle yard at the moment wondering where all the other boys have gone!  Not for long though ...