The importance of TLC

There are many things that make Ellie's Dairy different from the usual commercial goat herd.  We allow our girls to go outside and graze, we raise all our male kids and we treat all our animals as individuals - just a couple of examples of how we care for our goaties.

Attention to detail - that's the key.  Watching the animals and learning the character of each goat allows us to pick up very quickly if they are feeling a bit 'off colour'.  Recently, we have had a couple of the older girls who have been a bit under the weather for no particular reason, and they have been reluctant to push in with the others for food or at the hayracks.  A poorly goat can lose condition so quickly, shrinking from a lovely plump animal to something resembling a hat-stand almost overnight.  And other goats are often quite cruel to poorly animals - pushing them away from food.  I suppose it is a herd survival instinct - to weed out the weak and sick.

Whilst David is milking and I am feeding youngsters  I have been letting them wander around the 'forbidden' areas of the barn during milking time so that they have free access to the lucerne bale and the hay barn.  They absolutely love it!  They can just wander round and nibble away to their heart's content!  And they never overeat.  When they have had enough, they find a comfy corner in the hay barn to settle down to wait until milking is over and they can go back in with the rest of the herd.

So here are a few 'wanderers' this morning ... Chickweed, Tammy, Betty and Cora.  Also Maggi and Danni, our two new milkers who are still getting used to all those other stroppy goats and so like a bit of personal space from time to time. 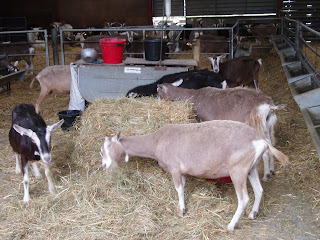 It only takes a day or so for them to get used to coming out and, as we sort the goats ready for milking, they all come and stand at the gate waiting to be let out!  I always feel mean when they are all back to normal and don't come out any more!

And it's always nice to have some special treats for them in case they need a little bit of encouragement to eat.  I managed to acquire some veggies and apples over the weekend and spent a happy half hour chopping them all up this morning while I was waiting for the milk tanker to wash out up at the cheese plant. 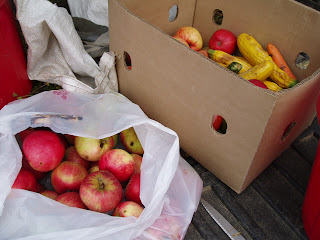 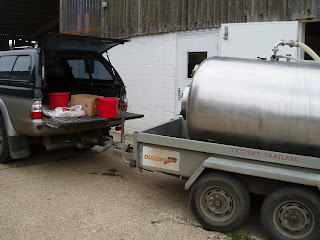 And what does this week have in store?  Well, David is mowing more grass for hay today.  Can you believe it?  Hay in September!  Ridiculous ... but we have to take the chance on getting some more in whilst we have the weather.  You can never have too much hay!  It's obviously not quite as nutritious this late in the season but it will be better than nothing if we start to run out.  So, I think it promises to be another mad week of hay making.
Then there's more markets at the weekend, a couple of little men to take to the butcher, a milk delivery to our wholesaler ... and a whole bunch of other stuff that I haven't even thought of yet!