What a beautiful sight it was!  The big tractor back in one piece and in the yard tonight: 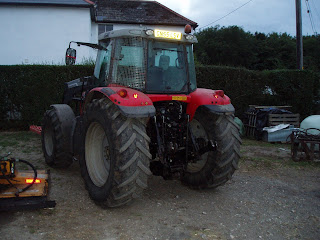 And while he was up to his armpits in oil and grease fixing the thing, what was I doing?  Working hard with the goats? Selling cheese to the good people of Kent? Bottling milk? Nope .... I gave myself the day off.  Yes.  A day off.  Well, a few hours off in between feeding and milking everyone morning and evening.  When you have livestock, the term 'day off' is relative ...

So, after getting up earlier than usual to get everyone fed and milked, taken another two little chaps to the butcher and had a wash (now there's a rare event), I found some clean clothes without holes in and set off for Godmersham Church (between Ashford and Canterbury): 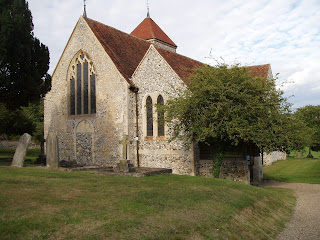 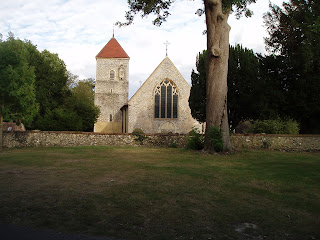 And there I spent the rest of the day in the delightful company of Sue and Rosemary learning to spin.  Weren't expecting that were you?! 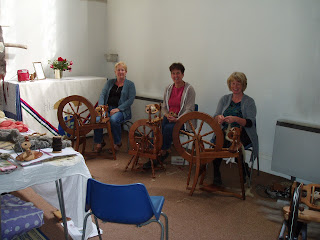 Our teacher was Della Newman who is a very talented local craftswoman from Wye, who specialises in using natural fibres for all her work. 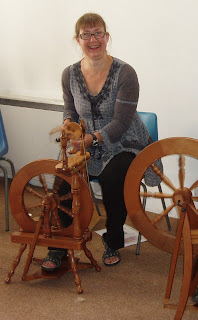 Della gave us an introduction to fibres, fleeces and spinning - she had brought some beautiful hand-spun yarns with her to show us, some of them dyed with natural dyes as well.  The gorgeous peachy coloured one is dyed with curry leaf: 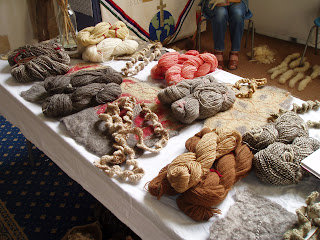 And then it was our turn!  We started with a fleece from a Portland sheep: 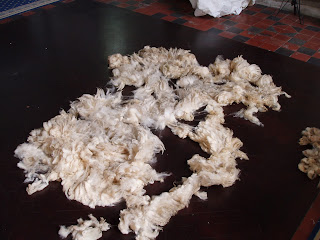 We sorted through it to find the good parts and then spent a while carding the fleece and rolling it into rolags ready for spinning: 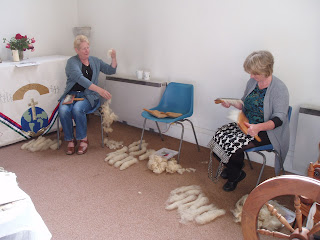 A quick lunch and then we were off!  And let me tell you - spinning is no easy thing to master.  It is difficult enough just to get the wheel spinning in the right direction and at a constant speed.  Then you have to tease out the fleece and keep feeding it through so that you get a nice even yarn.  Bit like trying to pat your head, rub your stomach and stand on one leg all at the same time.  I struggled for ages.  Kept breaking the yarn, twisting it up, treadling the wheel in the wrong direction ... But Della was very patient and eventually I was on a roll!! 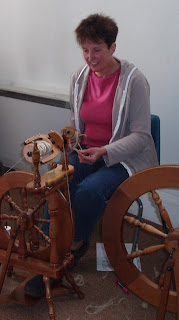 Once we had filled two bobbins, we then had to ply them together to make a knitable yarn.  And that means getting the spinning wheel to run in the opposite direction .... Simply couldn't get my head round it.  Couldn't do it.  Failed miserably.  Eventually, Della took pity on me and she treadled while I fed the fibre through.  Seemed to work rather well and I have to say that I was extremely pleased with my first ever attempt at spinning: 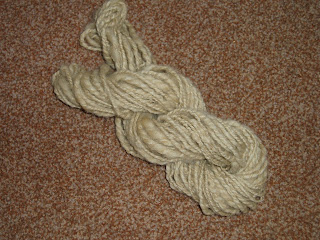 Look at that!  How clever am I?!  Just enough yarn there to knit a beer mat I think ...

Rosemary has a herd of alpacas and she had brought some of her own fleece to spin.  It was absolutely beautiful - so soft and silky: 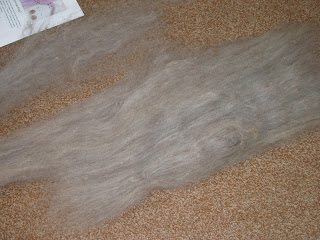 It was an extremely enjoyable day and spinning is very addictive.  The rhythm of the wheel and the feel of the wool is just so relaxing.  Wonderful stuff!

And finally, does this look like a smug, satisfied cat? 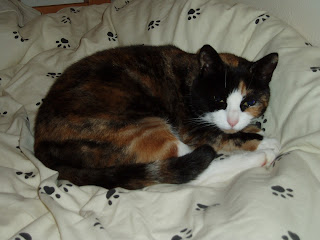 Beneath that 'butter wouldn't melt in the mouth' look lies the cold heart of a murderer.  Marmite had obviously been busy terrorising the local wildlife today as I came home to find sundry parts of a small disembowelled rabbit lying around the bathroom floor.  Some innards and two small feet were all that was left.  Not a sign of anything else.  Tasty ....