All on the move again

I seem to have spent the past few days loading and unloading goats from trailers as we're all on the move again.  Having moved Larkin back in with the big chaps last weekend, he was replaced this weekend by Daramac who was beside himself with excitement when he found himself in a house with over 50 lovely young ladies: 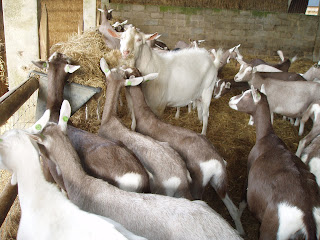 So, that's him sorted with the goatlings for the next few weeks!

Meanwhile, the commercial herd in Somerset who took Bramling and Caffrey some months ago, asked if we had any British Toggenburg males available.  I suggested that Larkin, Navajo and Norville may be suitable.  Not that I wanted to get rid of them, but it made sense to move them on as we have some lovely daughters from all of them and they could be put to very good use down in Somerset.

To my surprise the answer came back that they would take all three of them!  So, I loaded my lovely boys into a trailer this morning and off we all went to Somerset.  They went straight into their new home but into a separate area for the moment which gives them a chance to settle down before they are sent to work.  They have a huge area to live in and the most enormous hay rack: 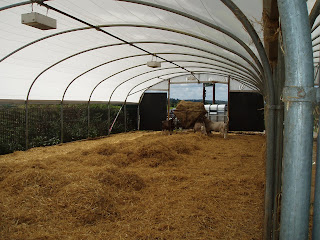 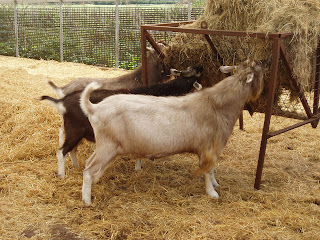 As you can see, it didn't take long for them to feel quite at home.  It was hard to leave them behind but I know they will have a good life there and will really enjoy their work!

It was nice to see that Larkin's brother Badger and his friend Tolly are still hard at work there as well.  I took them in about 3 years ago and they have grown into fine handsome men in that time: 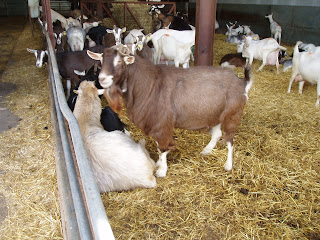 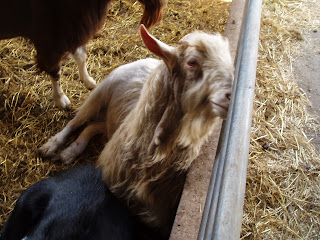 The two younger chaps, Bramling and Caffrey had been put in with a new lot of young ladies on Saturday and so they were far too busy to stop and chat to me! 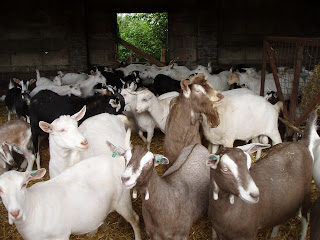 They are in the centre of the photo somewhere!!

The final move (for the moment) was to bring two female goaties back up to Kent with me.  Our friend Sue wanted us to have two of her lovely British Toggenburg girls as she is intending to concentrate on her Golden Guernseys again.  Sue is the person responsible for getting our boys into the herds in Somerset and used to have a small commercial dairy unit herself.  Although she still has a few goats of her own, she now mainly concentrates her efforts on helping out with the big commercials, particularly advising them on rearing their kids.

Sue has bred some fantastic milking goats in the past and was keen that her last two BTs should go to a good home where they would be appreciated and loved. And so it was that I brought Shares and her goatling daughter Silver home with me this afternoon.

They travelled well (despite rubbish traffic on the M25) and soon settled in to their temporary house in the hay barn: 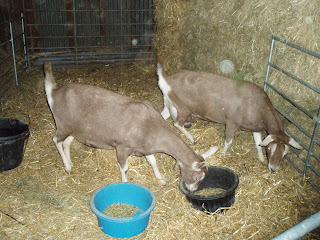 No doubt they will have a visit from the great escaping Ginger Goat this evening when she lets herself out for the night.  They will stay in this house for a while until they are ready to meet the rest of the stroppy milkers!

And of course, a visit to Somerset would not be complete without the random 'out of the truck window' shot of Stonehenge: 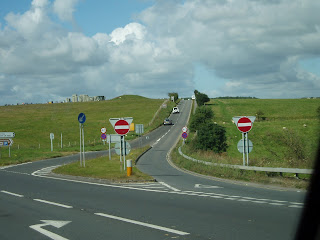 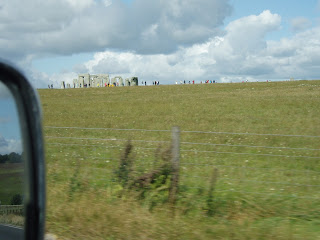