Norville and the case of the disappearing internet

So, there I was last night - all fired up and ready to blog about Norville's visit to the vet (as I know that you dear readers were concerned to know how my boy got on).  And what do I get?  Nothing.  Nada.  Zero. No internet. Well, not strictly true .. I got some kind of internet connection but nothing that I could do anything with.  I tried the mobile broadband (known more locally as mobile narrowband) and my neighbour's wireless connection .. both a pile of the proverbial brown stuff.

Anyhow - whatever it was seems to have fixed itself tonight and here I am.

So, young Norville was a very brave lad yesterday.  Our appointment was not until 11.30am and so I had to separate him off from the other big males to stop him eating breakfast - he had to be starved from the previous evening, much to his disgust.  I made a pen for him in front of the little chaps so that he had some male company until it was time to load him up and drive him the few miles to the vet.  Here's a good shot of his head so you can see what we were dealing with - see how those horns are pressing into his head? 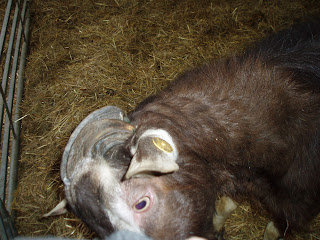 The vet decided that he would just sedate him rather than knock him out completely, but also gave him some local anaesthetic into the head area just in case.  The sedation drug was quite amazing .. one minute Norville was standing up on the stable door shouting his head off and the next minute he was standing quietly with his head down!  I guided him over to a more suitable place and he lay down and drifted off.  Poor boy .. here he is - fast asleep: 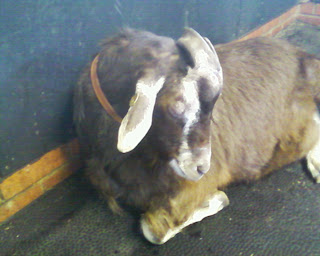 The operation was over very quickly without too much mess and it was time to reverse the sedation.  The vet made me a cup of tea while we were waiting for Norville to come round and a few minutes later he was back on his feet as if nothing had happened.  He tucked into a very late breakfast when we got back to the farm and then lay down and went back to sleep.  Poor lad did look a bit dozy for the rest of the day and so we left him in his own pen where he could just relax and not worry about the other chaps.  He had a comfy night next to the little men and then we put him back in with his big friends first thing this morning in time for breakfast.  They were all very pleased to see him and everyone remarked on his new hairdo: 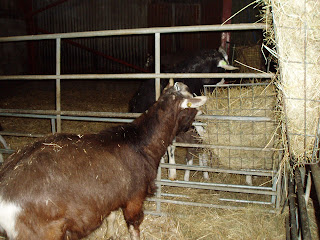 Much better!  Hopefully he will be happier now and won't spend so much time rubbing his head against the barn!

Whilst I was feeding the youngsters today I was thinking that they won't be the babies for much longer! It seems only a short time ago that we were watching them as tiny babies .. and here they are, all grown up. Well, most of them anyway ... I got a couple of pics of little Diggle goat. Bit blurry I'm afraid but you can get the idea .. Diggle is the very small brown one in the centre of the pics next to Mara (splodgy one). 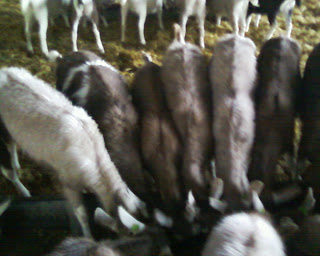 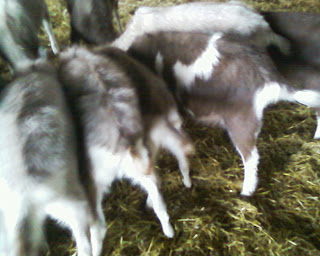 She is actually one of the oldest but has never really grown very much.  It doesn't seem to bother her at all though - she just thinks that she is the same size as everyone else!

So, off to bed for me .. it's been a long day today.  Went down to Sussex to my wholesaler and, true to form, it absolutely poured with rain.  It just wouldn't be the same if the sun was shining!
Posted by Ellie Goat at 23:06