Happy New Year - Chinese Style!  The year of the Black Dragon.  I'm a Green Dragon (some would rather unkindly say 'old dragon') so I don't know if it's going to be a good year or not.  But I did wear red socks today in the hope that it would bring me luck for the year ahead!  Celebrations start today and last for 15 days if you are thinking of celebrating ... 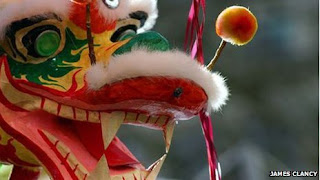 Well, the day started with a bit of spaceship spotting as it was a pretty clear morning and the International Space Station was due to come over.  So, at 6.45am we stood outside the barns and watched as it moved across the sky - it was visible for about 4 minutes and was pretty high up so easy to spot.  I would love to get a decent pair of binoculars to see if you can make out the shape of it at all. 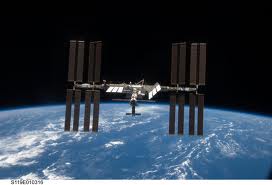 An hour later and it was down the road to the butcher for four of my lovely little men.  Only another four left now, and the two little stud boys to move on and that's everyone sorted.  Just in time to start all over again with the new kids.  It's a never ending cycle!  One of the remaining little chaps was sporting a lovely new hairdo this evening: 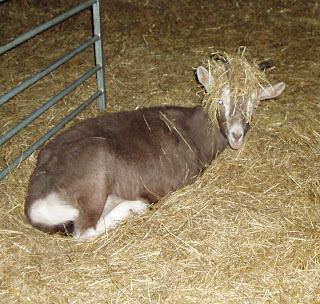 He obviously thought that he looked good anyway!
After the butcher, it was off to make cheese.  Just in case you are wondering how we get the milk to the cheese plant - here's the answer: 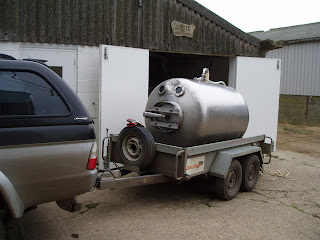 I used to hate towing things after a bad experience with a caravan in a high wind on the M3 many years ago!  But, it's a case of having to do it so frequently now that I have just got used to it .. I must say that I am getting a dab hand at reversing now as well.  Well, almost ... the goat trailer has a very short drawbar and tends to swing very quickly.  It does take me a few wiggles round the back of the butchers to get into the right position - much to the amusement of the vet and meat inspector who usually come out to watch.  At least they find me entertaining I suppose.
First batch of kefir was judged to be ready this evening.  I did try it yesterday but it still tasted like slightly warm milk (yuck!) and so I left it another day.  I have to say that it tastes a lot better this evening.  Next batch is fermenting already!
David was busy sorting out the Gracie Moos today.  We are getting ready to put a bull in with the older girls and so need to have the calves out of the way to avoid 'accidents'.  They are virtually weaned now anyway (doesn't time fly?!) and so he has moved the calves, and last year's heifer, up to the farm.  They are now in the area outside the goat barn which my big male goats use during the summer.  Of course, they have been separated from their mums and so there was a LOT of mooing going on this evening.  The goats were wondering what all the noise was!  David had been back to check on the cows in their field a few miles away and said that they were quite noisy as well.  They will only be separate for a couple of months and then everyone will be back together again.  Sadly, it was too dark for photos when I got home this evening so I will try and get some pics of them tomorrow.
Here's one of them taken earlier in the summer: 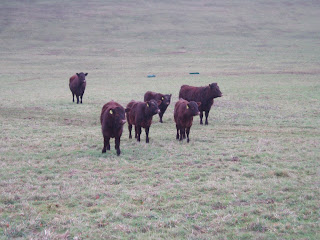