The Mac is back!

My little chap Daramac is back from his Xmas holidays with Auntie Mary at the seaside!  Judging by the number of stud fees that he has earned on his little sojourn, he has been a busy boy.  But he is thrilled to be back with all his friends: 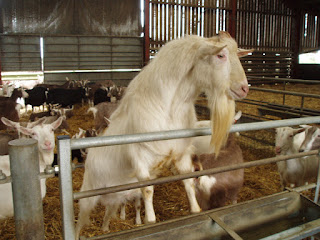 The girls were all very pleased to see him back again as he smelt rather good.  The boys, sensing a bit of competition, all gave him a bit of a friendly shove but they have all settled down together again quite happily.

And so, we are into the last month before the madness of kidding begins.  Some of those girls are getting very round now.  Poor Betty seems to have ballooned over the past few days: 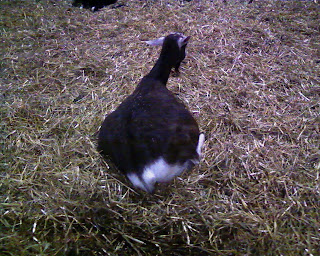 Little Luna was struggling to find a comfortable position to lie in this morning: 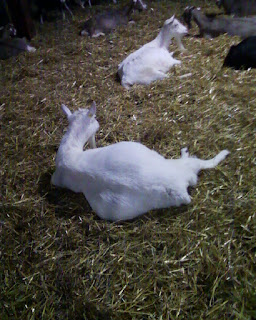 And Elfie was spreading out quite nicely too: 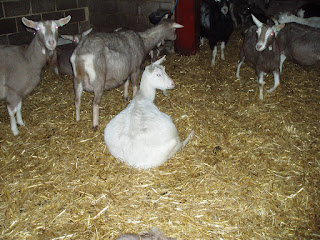 Notice how that little back leg is sticking out to the right.  Normally, the girls tuck their legs underneath them when they lie down, but as they get heavily pregnant and uncomfortable, they flop down on their bellies and the little legs stick out to the side!

And the other problem, of course, is that those damn udders start to fill up again!  Girls that have been dry for months suddenly start to sprout udders again - Maggie's started to appear again yesterday, still with 4 weeks to go: 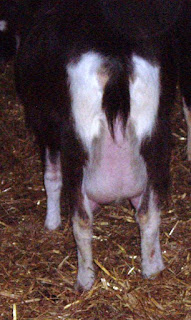 And it is very confusing for the young goatlings who have never had to deal with udders before.  Poor Takira had nothing last week and then suddenly this appeared ... 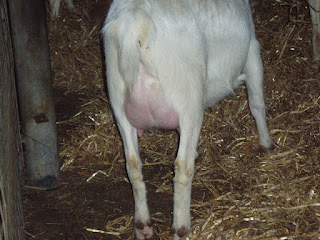 And, more news of the most spoilt goat in Kent arrived this week.  Seems that young Toggy was out and about in the snow with his nice warm goat-coat on .. 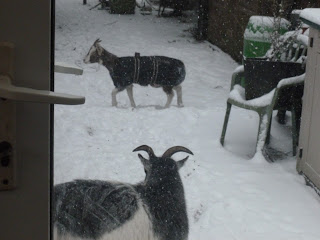 A photo obviously taken from the warmth of a position inside the house!!

I am enjoying a relatively quiet week again this week, mainly because I am car-less.  My poor little (much-abused) van is off the road at the moment waiting for us to spend some pennies on rather a lot of bits required to get it through the MOT. 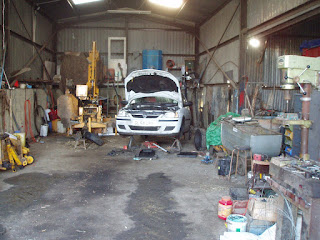 David has got it jacked up in the corner of the tractor shed and keeps pulling bits off it.  Then he comes and waves something broken at me and complains about my driving standards.  Nothing to do with the fact that it's always overloaded and spends most of its miles bouncing along rough country roads full of potholes big enough to sink the Titanic.  Poor little van.  So, I'm driving the pickup at the moment which is nice and big and fun to drive but you need a small mortgage to fill it up with petrol.  So, in the interests of frugality, I'm trying to do as little driving as possible!

But life will start to get busy again next week as I have the first two vet students of the year arriving on Monday.  A bit early for kidding but we have lots of pre-kidding jobs lined up for them as well as a demonstration from our acupuncturing vet, Monica.  I'm hoping to get Michael to come and scan the last of the pregnant girls and Peter the vet is coming along to castrate the two young bull calves.  Then it's off to Hadlow on Wednesday evening to give a talk to their Rural Business Group.

So that's this afternoon's task ... try to remember how to use Powerpoint .....