An alternative title could be 'win some, lose some' ...

The only thing that Jane and I had in common this weekend was good weather!!  She was absolutely rushed off her feet at the Eurofair whilst I was twiddling my thumbs at Brogdale.  As always, the Eurofair in Canterbury was a resounding success and Jane managed to sell tons of her own Ashmore cheese as well as bucket loads from Ellie's Dairy.  All our cheese was very well received and apparently the Shaggy's Beard and Fremlin's Kentish Log went down a storm.

Brogdale was pretty quiet and all the traders I spoke to had a very disappointing weekend.  Certainly there were not a lot of people about.  I think it may have something to do with the fact that they charge £8 entrance fee for which, as far as I could see, you didn't get an awful lot.  The organisers need to do some serious redesign for next year if they want to encourage traders to take part.

As it was so quiet, I had time to take a picture of my stall.  Note the complete lack of customers! 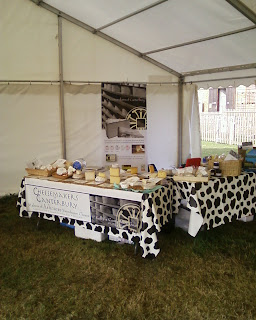 But the day ended on a less serious note as I returned to Dargate to unload and met up with Jane and her daughter Kelly who was getting to grips with a reconditioned trials bike that her dad (an ex bike racer) had found for her.  Not to be outdone by the teenagers, Jane and I decided to go for a quick spin up the drive on this thing.  Neither of us have been on a bike for more years than we care to remember and there was much chuckling as we headed off with me hanging on to Jane yelling 'don't go too fast!'.  Needless to say, she ignored me and as we hurtled over the first speed bump in the road, we both became airborne.  But a good landing was made by all and we continued apace to complete the circuit of several more speed bumps and a couple of corners before coming to a rather elegant stop in front of the dairy, much to the amusement of the teenagers who couldn't believe that the two almost-50-somethings could be so entertaining!
Next cheesey event this week is the East Kent Ploughing Match at Sheldwich, near Faversham.  Jane is working on her stall there whilst David and I have given ourselves the day off to go and visit.  It is always a good event and it gives David the chance to meet up with all the other local farmers before everyone goes into hibernation for the winter!