More goaties on the move!

You may remember that we sent almost 150 of our youngsters to start a new herd in Herefordshire last year.  Well, Andrew and Diane liked the girls so much that they asked if they could have some more this year.  So, a few weeks ago, David took around 50 female kids to their new home and this week was the turn of the next lot.

So, leaving Milking Mel, vet student Tessa and Auntie Anita in charge, we loaded another 49 little girlies into our trailer and headed off to the Welsh border.

The babies travelled very well and skipped out of the trailer into their new home: 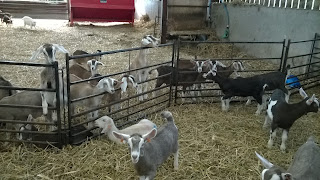 They were soon helping their new mum Diane and jumping all over the bales in their new house. 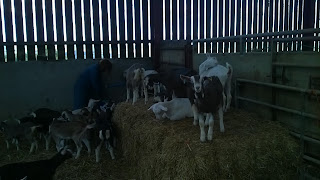 It was lovely to see all the other girls well settled - the kids which David moved up there a few weeks ago were all sunbathing and relaxing in a barn at the top of the farm: 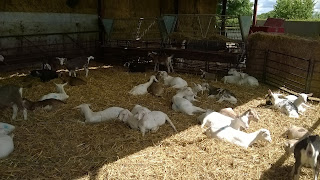 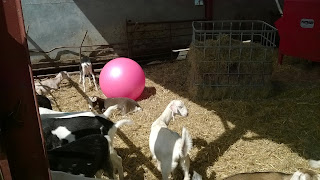 Whilst the older kids taken up in January, had grown well and were still up to their old tricks of climbing into the hay racks! 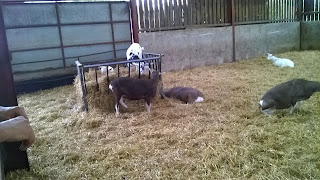 But the biggest change was the goatlings who are now all big old milking goats!  There were some lovely big udders amongst them and I was very proud to see how lovely they had all turned out.  Diane and Andrew had bought them a new toy that morning - a couple of big brushes mounted on a post that they could scratch and play with.  Very popular it was too! 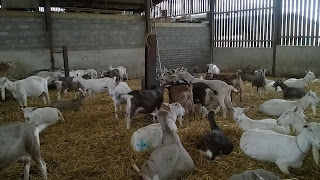 But one of them had decided that she would like to climb the ladder and go and help the electricians who were working on the milking parlour roof .. 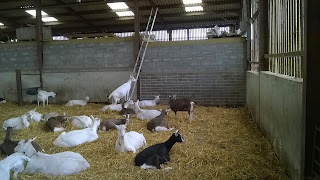 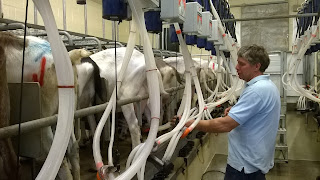 The parlour is much bigger than ours and takes 40 goats at a time.  The girls all queue up to get in: 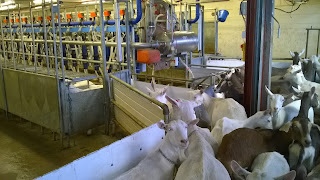 And they are pretty well behaved as they are being milked .. 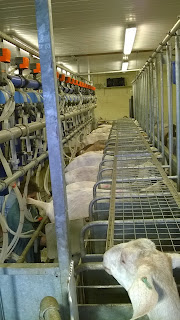 It was so nice to see them all again and many of them did recognise us, though a couple looked very confused as to why we had turned up in their new home!

And just to prove that it's not just our goats who are silly .. here's one of Diane's little meat boys: 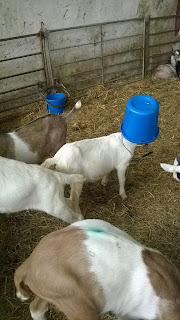 It was lovely to have the chance to take Andrew and Diane out for dinner after milking and catch up on all the news and compare notes on all those goatie bits and pieces!  An overnight stay in our beautiful B&B at Lowe Farm, a huge breakfast .. and then back on the road home to Kent with an empty trailer.