The day the scanning man came to call

Yes indeedy - it's that time of year again.  Doesn't seem 5 minutes since we did it all last year.  Michael had his work cut out for him this morning with over 180 goaties to scan but we have a pretty good system set up and we got through them all in about 2 hours. 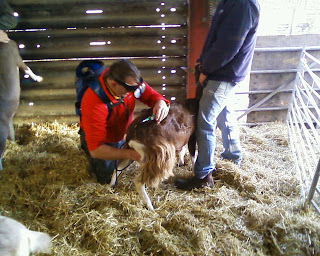 Only 4 sets of triplets due this year, although young Ellie may also have triplets - Michael could definitely see 2 babies but there was a possibility of a third hiding round the corner!  Most of the other goaties are having twins but we do have a few just with singles.  As we still have milk this winter, we are leaving quite a few girls to 'run through' - ie. they just carry on milking and we don't put them in kid.  But a quick calculation tells me that we have somewhere in the region of 170 kids due.  It's going to be busy!

So the scanning highlights of today .... poor Bunnie has only one tiny dead baby inside.  She was a bit poorly a couple of weeks ago and so that probably has something to do with it.  However, the kid is small enough for her to reabsorb and so her body will just break it down and it will disappear.  It's a strange phenomenon but does happen.  And Maisie who kept our winter milk going virtually single-handed last winter, has finally got in kid again.  She has been milking since she kidded in 2009 and not stopped or had kids since!

Approx date for start of kidding is 7 March with Mora and her daughter Millie both due on that day.

As always, there are a few girlies who should be pregnant but aren't .. so we will be sorting them out this week and sending the boys back in to finish the job!

Meanwhile, Mary's youngsters have made themselves completely at home and seem very happy in their new house. 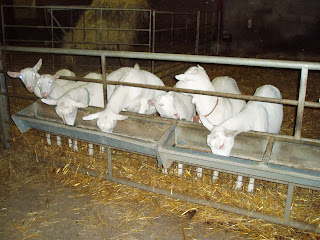 However, as they were eating their tea tonight, they were joined by a very nosey young Husky who decided that she might like to have a taste of their food .. 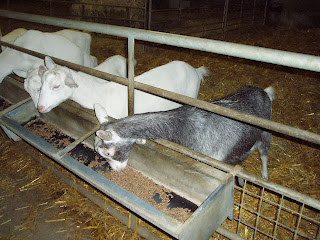