Just when you think you have everyone sorted, the music starts again and all the goaties move around!  Doesn't seem 5 minutes since kidding but we are now starting to get everyone ready and in position (no pun intended!) for mating season.

So, the goatlings are now outside in the cattle yard, waiting patiently for their new young man to come along.  Hopefully, I am going to collect a handsome chap tomorrow but more on that in due course.

All the babies are now in the barn that the goatlings used to inhabit ... all 170 (ish) of them!  It's quite a battle of wits and speed to get food in to them every day but I think we all have fun doing it! 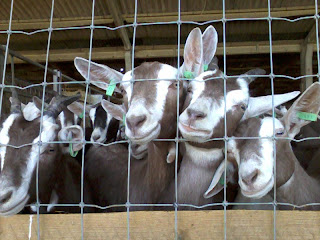 Here's a bunch of them at their hay rack: 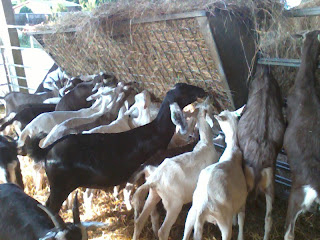 But who is that black goat with the long ears??  Looks too big to be a little kid ...  Yes indeed, it's our lovely Cleo.  As Cleo will have a special boyfriend (with long ears), we need her to be moved away from the rest of the goatlings and their boyfriend.  However, there is also someone else who has had to be moved away as we can't let her become pregnant ... 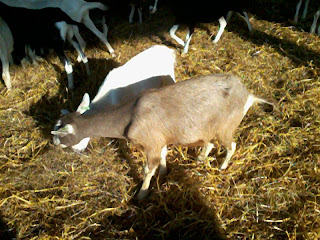 Little Fizzy.  Fortunately, she and Cleo are best friends and so they are perfectly happy together with all those babies.  And, as you see, Fizzy is around the same size!!
So that's the girlies sorted .. what about the boys?
Well, my 6 little stud boys have all gone off to their new home in Somerset: 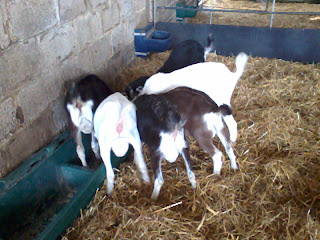 And the big chaps are temporarily back in the main barn waiting to go to work with those lovely girls: 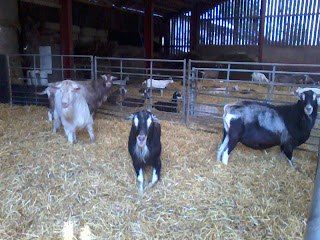 The smell level has risen ever so slightly with their arrival .... and they are well into the swing of things.  Blowing raspberries and snorting over the fence at all the girls and other such unpleasant habits that are characteristic of male goats ... Trust me, you don't want to know!