So, as I mentioned in our last blog, the goatlings have a new boyfriend.  Meet Hugo: 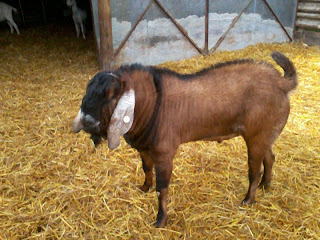 Looks a bit grumpy in this photo but he is a lovely Anglo-Nubian buckling.  Very handsome and rather well bred.  He was living near Canterbury with a lady who found that he was getting a bit too big and strong for her to handle and so he has come to live with us.

Hugo has lived on his own away from female company for quite some time and so he was VERY excited to be confronted with a yard full of pretty young goatlings!

Unfortunately for Hugo, the goatlings have never seen such a big chap at close quarters - especially one with such huge ears - and so they were all very wary of him to start with.  As he ran into their area, they all ran to the other end and just stared at him: Unperturbed, he sniffed around for a bit on his own 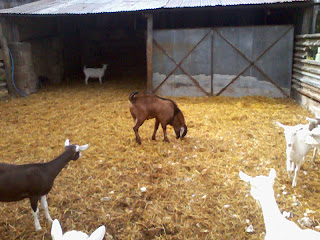 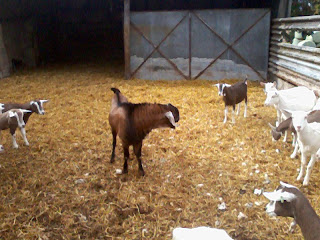 Meanwhile, the milkers were trying to get a better view over their gate (which we had shut as we walked Hugo through the yard) 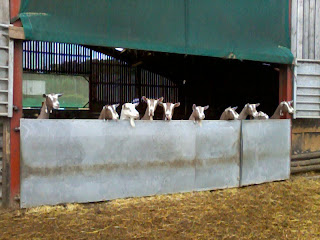 And, it has to be said, his arrival has caused the other boys to sulk.  Badly.  They can smell and hear that there is a new boy in town but they haven't yet met him.  But they know that he is out there with THEIR goatlings.  Not happy.  Not happy at all.  In fact, the boys sulked so much that they all refused to eat for a whole day.  Couldn't even be tempted by a nice banana.  Now that's a serious sulk.

However, like most things goatie, their grumpiness was short-lived and they are now back to their usual selves, snorting and blowing at the other girls in the barn.  Their turn will come!!
Posted by Ellie Goat at 22:48