That was a hot one!

Lordie that was a hot weekend!!  Glorious weather for the Kent Show but a little too warm for most people I think.  Certainly too hot for cheese ... but at least we didn't have as many problems as the chocolate lady!  And our friends at Solley's Ice Cream and Simply Ice Cream were rubbing their hands with glee as they restacked their freezers for the umpteenth time over the weekend!  Made a change from last year when we were in wellies and jackets for 3 days.

Once again I shared a stand with Jane the Cheese: 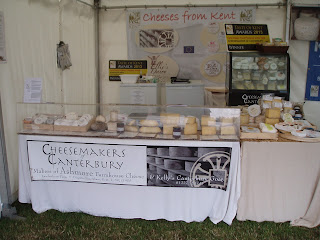 And we were next to our blue cheesey colleagues from Kentish Blue: 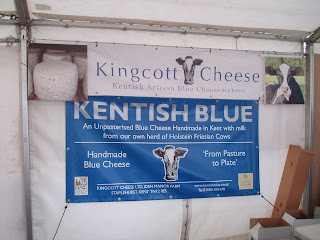 Karen is opening her new on-line shop at the beginning of August and so you will be able to purchase their delicious unpasteurised blue cheeses direct from her.  We will keep you informed of all the details as we know how much you like that raw cheese! 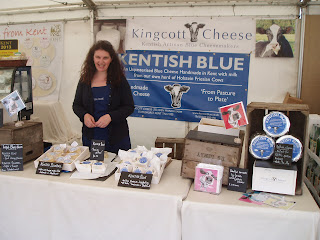 David spent the weekend hay making, although there has also been a lot of swearing going on as the tractor decided to throw a tantrum.  It started to change gear all by itself ... I figured that it was possessed but apparently it was a fault with the electronics.  Multiple engineers and a new 'black box' got it going again but I am not looking forward to the bill for that one ... Wonder if we can pay it off in cheese?!

The goaties have been lying around panting in the heat and are bearing up pretty well, although there are a couple who clearly are not happy to be so warm.  Lots of fresh cold water and damp towels at milking time have kept them going!

Here's a couple of the young milkers absolutely flat out in the heat of the day! 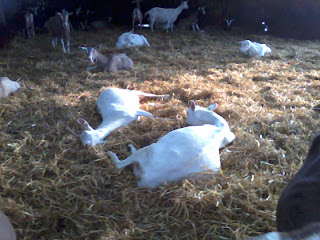 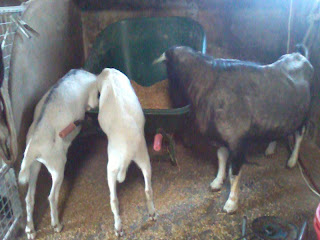 When we have finished milking and bring everyone back into the barn for the night, she comes out of the milkers' area and settles down on her bale: 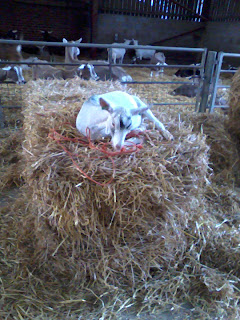 I think she has got her little life pretty much sorted!
Posted by Ellie Goat at 22:10