First hay of the season

And here it is ... straight out of the baler this evening.  The first new hay of the season. 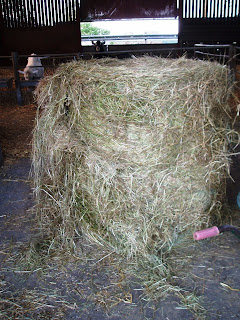 It's such a shame that we don't have smellyvision as it smells just divine.  And the goaties could hardly contain their excitement when they found such deliciousness in their hayracks this evening.

David was under strict instructions to take a photo of one of the first bales out of the new baler.  And he duly obliged ... 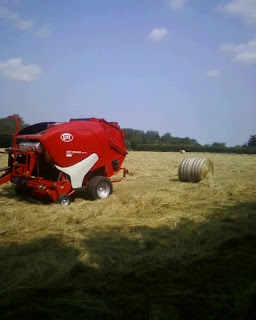 I think that the new baler is making life so much easier for him.  And much quicker to bale all that lovely hay as well.  He is going great guns at the moment with around 200 of these huge bales done already.  And plenty more to come yet!

It is such a relief to get fresh hay baled in July .. the last couple of years have been so awful that we have really struggled to get anything decent baled at all.  Haymaking may seem a trivial thing to many people but this is our main forage crop for those goaties and we need hundreds and hundreds of bales to keep everyone full and happy throughout the year.  Plenty of good hay goes a long way to making sure that we keep milking through the winter .... and many of you will remember what a horrendous time we had last year ..

Once again it's been a week of mixed fortunes ... The hot weather is good for haymaking but the goaties are suffering a bit in the extreme heat and we have unfortunately lost one of our little female kids to pneumonia.  Hot days with little air followed by misty, chilly nights are perfect conditions for snuffly noses and chesty coughs to start ... little girlie goat number 495 (she didn't have a name yet) started to look a little under the weather on Thursday and, by Friday evening, was quite poorly despite medication.

She settled herself down in the hay barn for the night and I decided that I would spend the night with her as I wasn't at all happy with the way she looked.  So, it was a long and uncomfortable night snuggled down next her on the straw floor of the barn listening to all the rats rustling about and squeaking.  She finally passed away around 3am after a pretty restless night.

So, you can imagine that I wasn't exactly on top form on Saturday morning!  I made a quick visit to Wye Market to drop off supplies for Jane the Cheese and her mum who were covering the stall for the morning .. then it was back to the farm to load up cheese and goats for our veterinary practice Open Day.

I had selected 5 little girlie goats to take with me ... and they were very popular with all the visitors! 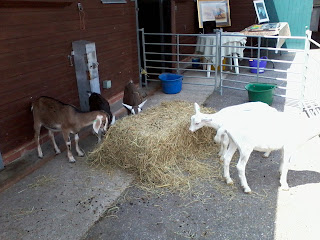 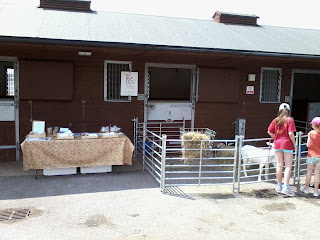 Husky was worn out with all the effort .. 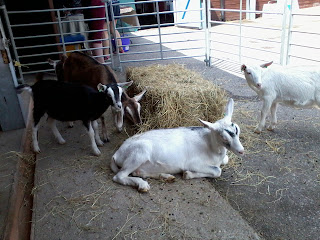 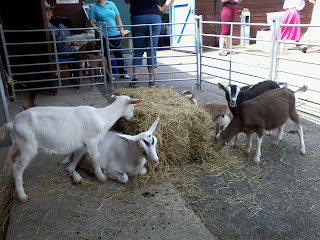 but decided that she would be far more comfortable sitting on top of the bale .. 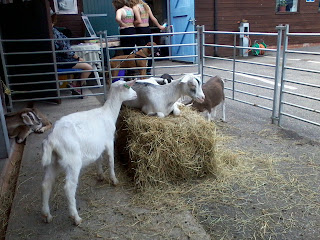 And while we're on the subject of comfortable goats .... here's Polly during milking this evening ... 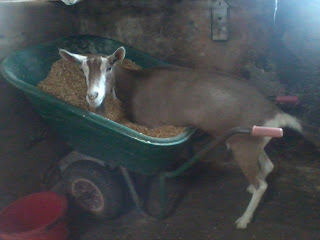 For some reason she decided that it would be far easier to kneel down in the wheelbarrow rather than stand next to it ...  bad goat!