It's that old mobile broadband problem again .... I'm now on my 3rd network to see if I can get one that actually works.  So far, so good .... But I can't believe that it will last!

Anyhow ... what's been going on then?  No more babies ... Twinkle is not due until next week so I am spending a few nights at home with Marmite cat who seems very pleased to see me.  She hasn't been happy with the weather over the past few days - it seems like a good excuse just to stay curled up on the bed all day.  Think I'm going to come back as a cat in my next life ...

I had an interesting request from one of our London customers last week.  A really nice young chap called Andy orders our milk via Franklins Farm Shop in East Dulwich and makes the most amazing cheeses.  He does have his own blog - look up 'Handyface Cheese' and you will find him.  Anyway - he has entered the Young British Foodie competition as a cheesemaker and as part of the competition, he has to come up with 'the next big idea'.  Andy thought it would be interesting to make cheese from the milk of one single identifiable animal and he wondered if we could help.

Here at Ellie's Dairy, we like an unusual request and rose to the challenge.  Our wonderful Footsie goat was selected to be The One as she is rather special, very cooperative and also produces a nice amount of milk.  We had to get Footsie into the milking parlour before everyone else so that we could be certain that the milk we drew out of the system was hers alone.  Given Footsie's penchant for bananas or food in any form, this was a simple task.  Call 'Footsie!', open the gate, rattle bucket and get Footsie to follow into the parlour.

And here she is, all on her own: 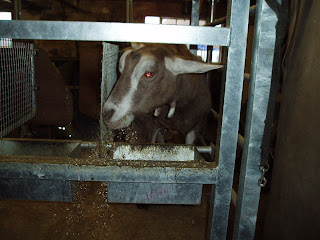 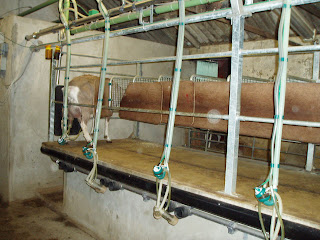 We filtered and bottled the milk separately and I delivered it to Franklins on Friday for Andy to collect.  He has made the cheese and it has gone into the moulds tonight.  Can't wait to see how it turns out!  If he makes it into the final of the competition, I will let you know.

And it's about time for a couple of wee videos.  Here is one of the older white male kids.  Even though he has been fed already, he likes to keep on coming back for more.  Probably our best showjumping goat this year:


And here's one of some of the younger kids, including the Nubettes.  For some reason they don't seem to like where one of the other kids is sitting - they prod and poke him until he finally moves, and then they start skipping about.  Watch those ears swing! And listen out for one of the Gracie Moo calves in the background ...


So, it's a weekend of markets for me.  Wye was exceedingly chilly and wet this morning.  Not sure what the forecast is for Parson's Green tomorrow and Lower Halstow on Monday.  Hopefully sunny and warm but I think I might be a bit optimistic there.