Well, I did get an early night last night but was woken around 2am this morning by young Martha in labour.  She popped out one male and one female, cleaned them up and settled down pretty quickly, so I was back in my sleeping bag before 3am.  Which was good, considering I had to be up again around 4.30am.

Martha can be quite a scatty little goat at times and so I was expecting her kidding to be a bit of a drama but she surprised me.  Here she is with her two little people - one at her side and the other tucked in below the bucket on the left of the photo: 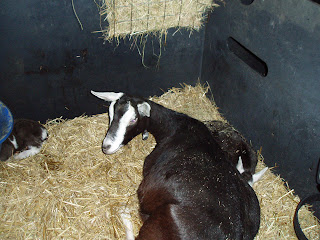 So, this morning after I had sorted everyone out, we loaded up Caffrey and Bramling and I set off for Somerset to take them to their new home.  They are going into a large commercial unit which already has two of my older boys in there - Badger (Larkin's brother) and his friend Tolly moved in there 3 years ago and are still going strong.

Despite having never been off our farm, they travelled well in the trailer and settled in to their temporary house very quickly, investigating the hay rack and their next door neighbour: 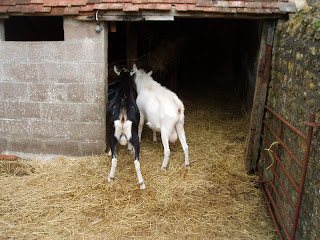 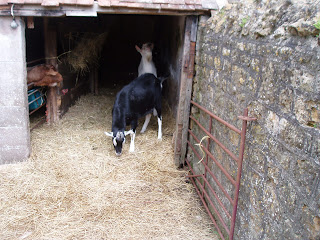 They have a couple of days' rest here before they are moved onto the larger unit - they will go straight in with a large group of females who require their services.  I would love to be there to see their faces when they realise that all those ladies are just waiting for them to arrive!  They will be very busy boys!

While I was away, David was attending to Saffron and Moonstar who both decided to produce twin boys this afternoon - so there we go.  All over!!!  Last babies born on 20 May, 2 days ahead of schedule.  Tomorrow I will do a final count of how many we have had, just out of interest.

And so I leave you with the final mums of 2012 - Saffron and Moonstar: 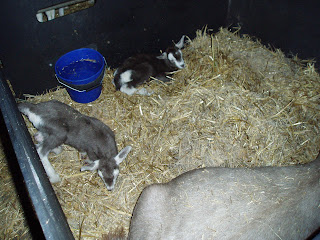 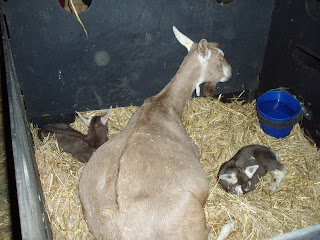