So, after writing the last blog on Monday, I returned to the barn to find one of the little white female kids bloated and crying in obvious distress.  I filled one of the spare kidding pens with straw and sat with her for a few hours as we both watched the thunder and lightening filling the night sky.  But, despite all my best efforts and care, I was not able to save her and I lost her in the early hours of yesterday morning.  She would have been a month old on the day that she died.

It was a distressing time and, as we have had a couple of cases like this now, I decided to ask our vet to call in on his way to the surgery.  There are a number of things that may have caused her to bloat so suddenly and severely, but the only way to tell for certain is to have her sent off for post mortem at the government lab in Winchester.  We have done this on several occasions in the past and it is really the only way to learn the cause of death in certain cases.  So, Peter took my little girl away and we await the results.

As I think I have said before, kidding is a lovely time for all the new babies but it is also the most stressful time of year.  We often have to put a brave face on things, especially when we are out in the public eye delivering cheese or selling at markets .. under the surface we are often heartbroken and upset.  Unless you have animals yourself, you cannot imagine the pain of losing your babies when you are often powerless to help them.  All you can do sometimes is just hold them, comfort them and be there for them as they slip away.

As most of the kidding is out of the way now, David decided that we should spend a couple of days mucking out while the weather wasn't too bad.  So, we moved all the milkers to one side of the barn, dismantled all the gates on the other side and off David went in his tractor.  We bought a second-hand dung fork last year to fit the smaller, older tractor and it was worth every penny.  David reckons that it can scoop about a ton of muck in one go!  It just makes the job so much quicker for him.  It's a vicious looking bit of kit though - I think it looks rather sinister! 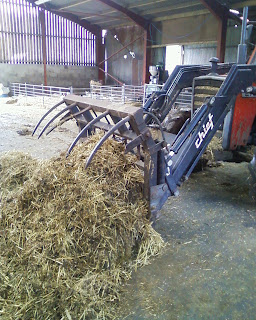 So, we did one side of the barn yesterday and the other side today.  David did have a bit of a mishap when he was bringing one of the new straw bales in ... he was coming back to the barn when the wrapping on the bale suddenly exploded and everything fell apart ..  Oops ... 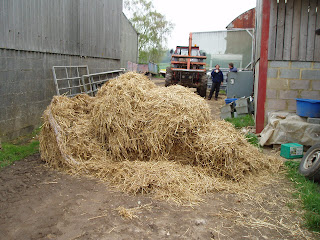 Anyway, it was all retrieved and all the goaties are rustling around on new straw tonight!  Kitty was very happy that there was also a huge new bale of hay for her to climb on: 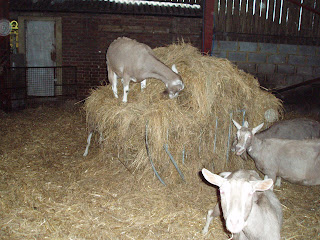 Patsy spent most of last night and this morning happily chortling away to her stomach ... she finally decided to pop her kids out mid-afternoon.  Bear in mind that we didn't even know that she was pregnant until a few weeks ago!  And who was the daddy??!  Well, here she is with her new babies - one male and one female: 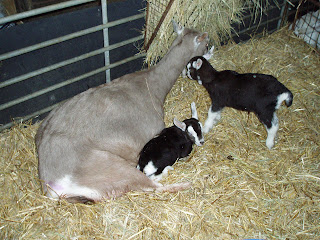 So, as they are both a lovely dark chocolate brown, I think we can safely assume that young Caffrey did the deed!  If it had been Bramling, the kids would almost certainly have been white.  So, that's another mystery solved.