I had a very surreal experience yesterday when I made a brief visit to one of the local garden centres, wearing shorts in the searing heat of the day and finding the place full of Xmas trees and Santa in the snow.  I suppose that's what it must be like to celebrate Xmas in Australia!  And again tonight - blistering hot day but almost dark by 7.45pm.  Weird ...

Still, the good weather has meant a good turn out for the Broadstairs Food Festival which is going with a swing.  Wye Market was pretty good this morning and everyone was enjoying the glorious weather.  I don't expect that I will be wearing shorts for the next market in a couple of weeks though, especially as the long range forecast is threatening snow at the end of October!

I am also currently talking to the London Farmer's Markets organisation about the possibility of doing a few markets up in town.  It's something that we have been considering for a while and I think that we really have to try it, just to see how we get on.  There is certainly a demand for goat's cheese and, more especially, for unpasteurised milk, so hopefully we will have no problem selling our products.  I am hoping to go and visit a couple of the markets next week just to get some idea of what I am letting myself in for!

More importantly, we managed to get our first goat mated today.  Moyra, a rather large stroppy white goat, did not get in kid last year and, despite our best efforts (and those of our male Daramac!) she remained barren and not milking for the rest of the year.  As Daramac is still with another herd at Margate at the moment, we had to select another boy to do the honours today.  None of our males are related to her and so every one was a potential suitor but the winner would be whoever managed to get through the gate first!  Not surprisingly, it was Navajo who seized the opportunity and pushed all the others out of the way as he dashed out to woo his lady.  Job done, he then returned to the other boys with something of a smile on his face!  If Moyra holds this time, we are scheduled to start kidding at the beginning of March 2012, a couple of weeks later than usual.

And so, in celebration, I thought we should have a photo of a white kid, just to get everyone in the mood .. 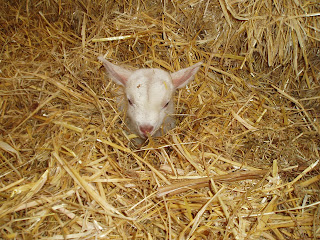 This tiny person was born at the end of February this year.  Only a couple of hours old and mum decided that she must be feeling a bit chilly and so virtually buried her in the straw - just left her little head poking out.
Posted by Ellie Goat at 21:36