The boy is back in town!

My white boy Daramac arrived back from his vacation in Margate yesterday as planned.  When he left us at the end of last season, he was only a kid: 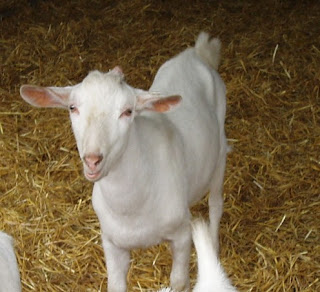 But you know what kids are like ... they leave home and grow up.  They grow beards and forget to wash.  They start to think about girls.  And then they come home again. 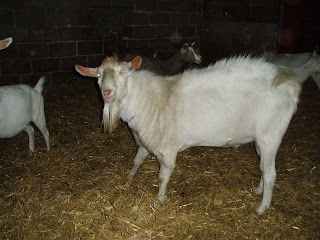 Like any male goat, he has developed a few bad habits and it's a good job that you can't view this blog in full 'smellyvision'.  The odour of a male goat in season has to be experienced to be believed.

Walking a very large and powerful new male through a group of 150 girls is quite a challenge but I managed to get him in without any mishaps as we had the element of surprise on our side - I managed to unload him out of the trailer and get through the back gate of the goat barn before the girls noticed we were there.  I put him straight in with a specially selected group of goatlings (goat teenagers!) and they immediately all snorted and ran to the far end of their area.  Although they have been getting to know our on-site males, they have not yet had the opportunity to experience a large male at close quarters and Daramac was a bit more than they bargained for!

After the initial panic and a lot of snorting and running about, everyone calmed down.  The goatlings are getting used to having him around and some of them are even brave enough to go up to him for a chat.  He has settled in very quickly and is having a lovely time with his harem.  Our other boys are a bit put out about the whole thing though as they are still outside at the moment and the new boy has gone straight into the barn.  It's just not on, you know!  Their turn will come ...