I spent yesterday evening in the company of a charitable group in Sittingbourne called the Catenians.  I had been invited to speak to the ladies of the group at one of their meetings, while the gentlemen discussed more serious business matters.  Laptop and digital projector in hand, I sallied forth to regale the ladies with tales of goats and cheese.  My allotted hour passed extremely quickly and the ladies all seemed to enjoy the talk and the many pictures of goats.

Everyone in the group was extremely welcoming and I had a thoroughly enjoyable evening, especially as I had been invited to join the group for dinner, which was delicious.  As a green-haired, lentil-eating vegetarian type, I had prebooked my meal with my host who had advised that I had a 'roasted vegetable bake' to look forward to.  However, on arrival, it seemed that there had been a slight change of menu.  Returning from the kitchen with a broad grin on his face, my host announced that I would be enjoying a nut roast with, yes you've guessed it, goat's cheese topping!!

I had prepared a cheeseboard with a full range of the Ellie's Dairy and Cheesemakers of Canterbury goat cheese and, so that the gentlemen could enjoy this as well, we decided to offer the cheese after the main meal.  There were a lot of very positive comments about the cheeses, including one gentleman who said that he would be taking some down to his house in France on his next visit as he considered it better than the French goat cheese!  I did notice that there were an awful lot of empty plates at the end of the meal .. not a scrap of cheese to be seen. 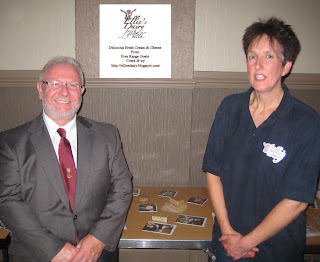 Pictured with Steve Goldsmith, Vice-President of the Swale Circle of Catenians, who was my very generous host for the evening.
I managed to get a fairly close picture of the Gracie Moos today as well - look how big those calves have grown in a couple of weeks! 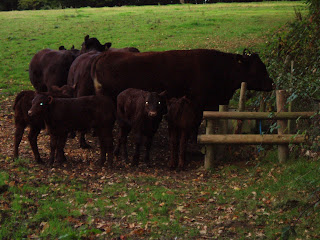 And, jumping in hayracks seems to be the new sport in the goat shed.  The British Alpine goatling that we have already seen was at it again this morning ... 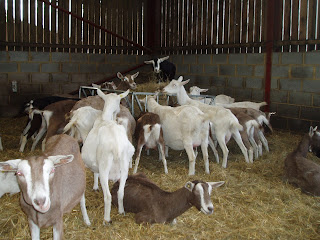 And it seems that she has become a bit of a role model for the kids across the way ... 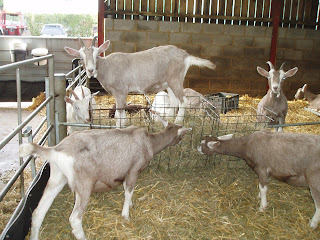 This little chap has discovered that he can bounce in and out of the hayracks very easily, so there is no stopping him now.  Fortunately, noone else has copied him.  Yet ...
And the big chaps also got a whole new big bale of straw in their pen this morning.  As they spend so much time pacing around blowing raspberries at the girls, they tend to make part of their area extremely muddy, so we have to load it up with fresh straw on a regular basis to keep them comfortable and clean. 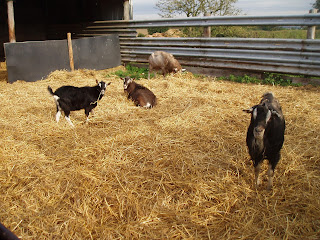 As you see, Norville found it extremely comfortable!  The small black goat to the left of the picture is Caffrey (son of Max), one of our little apprentice stud boys who will hopefully be moving to Somerset later this year.
And here's some of the big fellas as a couple of the girls grabbed their attention! 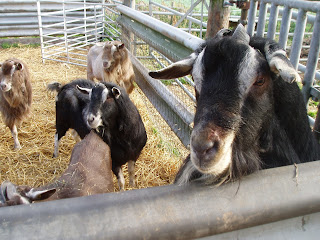 From the left, you can see Larkin, Max and Fremlin behind him.  Beamish is ﻿up close and personal and you can just about see Norville in front of Max.  Navajo was taking it easy out of camera range!