Coming to the end

So, as promised, a pic of Twinkle's babies.  Well, one of them anyway ... the other one refused to stay still long enough to have her photo taken.  This was taken as we arrived home from the vet after disbudding: 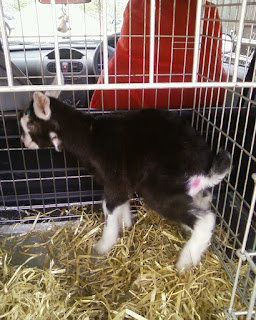 Since then, Bassey has had two boys - one black and one brown.  They arrived on Wednesday afternoon: 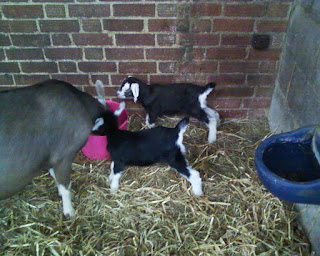 So that just leaves Kitty now - the last goat to kid this year.  Unless anyone else has any surprises in store for us, that should be it for another year!

Valerie and her little men were lounging around by the hayrack again today.  The white boy was absolutely fast asleep next to mum: 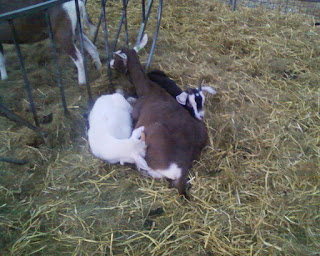 The black one is far more adventurous and he decided that he might like to have a little trot into the milking parlour tonight.  So, here he is, eating his supper with Uncle Fremlin who also decided to come in for some reason! 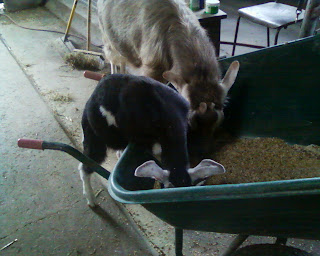 And, sadly we have a little poorly goat at the moment.  Not quite sure what is wrong with her - she is bright and happy enough but her front legs seem to belong to someone else.  I found her unable to stand up yesterday morning, although she is still eating and drinking quite happily.

As the other kids are very bouncy and kept jumping all over her, we moved her outside her pen.  David made her a nice comfy straw bed and so she has her own bowl of food and pile of hay, right next to her little friends: 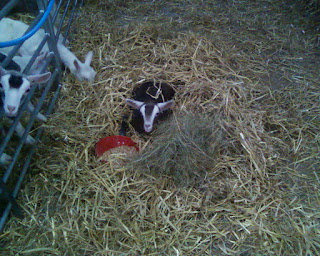 She does seem to be a little better today and is trying to move her legs around, so hopefully that's a good sign and she will soon be back to normal.

David spent today trimming feet in the goatlings' house as 30 of them are off to a lovely new home in Herefordshire on Tuesday.  A young couple are expanding their dairy herd and are taking some of our lucky goatlings ready for mating in the autumn.

They have all been blood tested to make sure that they are clear of any nasty diseases and are all now ready to go.  A farmer friend is transporting them for us in his lorry and is coming to load up at 3am on Tuesday morning.  It's going to be an early start to the day for everyone!
Posted by Ellie Goat at 22:20