Walk into the barn most afternoons and you will invariably find Madam Ginger Goat wandering around snacking on lucerne or hay.  I think David has now finally thrown in the towel and doesn't even try to get her to stay in with the other goats!  She is quite happy tiddling about and never wanders off.  She just seems to like being on her own.

Except that she is no longer on her own.  Meet The Apprentice: 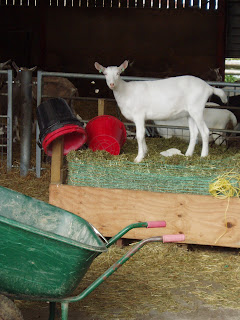 Yes indeed, dear readers .. it would seem that we have another Ginger in the making.  Only she doesn't squeeze through the gates like Ginger.  She leaps over the top of them.  No matter how high the gate.  She stands back and assesses the height ... takes a few steps back, runs and launches herself over.

Like Ginger, she is quite content just to wander about and have the odd snack.  Then she finds a comfy bit of straw to lie on and settles down to wait for the humans to arrive.  As soon as someone walks into the barn, she runs over to greet them. 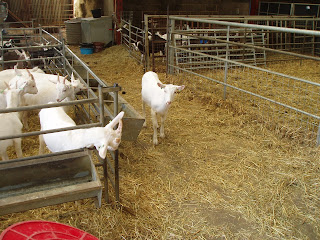 As we can't keep calling her '298' (her eartag number), David decided that she should have a name.  McQueen.  Can't think why ....  So, she has become little McQueenie goat ..

The weather has been rather changeable (to say the least).  The forecast early in the week was for mostly hot and sunny weather with a couple of isolated showers.  Good haymaking weather.  So, David mowed off one field.  And then the forecast changed.  And we have had really heavy showers.  And quite a few of them.  Despite all that, David persevered and this morning the hay was ready to bale.  So, out he went to row it all up ready for baling ... and it poured with rain.  Absolutely chucked it down.  And it looks like we may have lost the lot now.  Good job he only cut one field.

When the weather is nice, the goaties go outside to play: 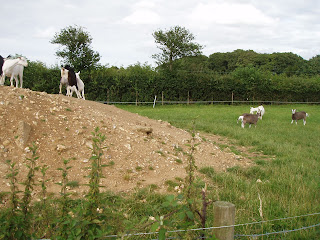 When the weather is wet, they stay indoors and you can always see a couple of sad little faces peering out of the back door: 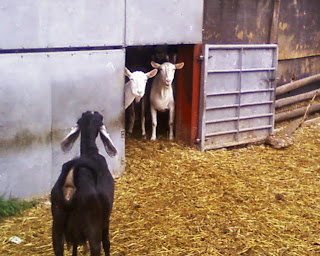 Larkin is becoming very popular with his ladies and they are quite happy to have him around.  They even allow him to share their hay rack: 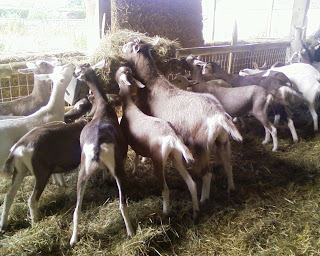 Well, that's my day done!  Off to Wye Market tomorrow and then Parson's Green on Sunday.  I have to say that the London markets are fairly quiet at the moment - everyone has stayed out of town for the Olympics.