At 10pm last night, David had both tractors broken down in the shed.  Oh dear ... Small old tractor had a fuel problem and had broken down earlier in the day.  The newer larger tractor had arrived back at the farm when suddenly one of the rear tyres started to go down ... rather rapidly.

So, a late night for David fixing the little tractor and an early morning for those wonderful chaps who fix agricultural punctures.  They arrived just after 5am this morning, having finished work yesterday sometime after midnight.  It's harvest silly season and they are very busy ...

And this was the cause of the puncture: 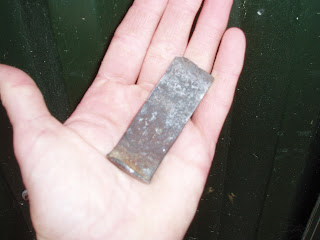 A rather large piece of metal that looks suspiciously like a chisel blade.  No idea where he managed to pick that up, but it did make rather a large hole in the tyre.  Fortunately, the nice men were able to repair the tyre ... a small mercy when a new tyre would cost over £1500.  Mmmm ...

As the sun rose, the doggies suddenly started to bark.  As I walked out of the barn to investigate, I was met by the Leeds Castle hot air balloon flying overhead: 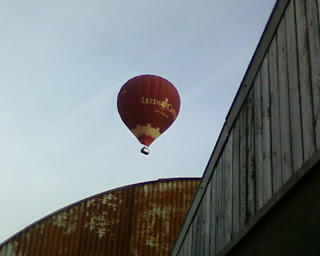 A wonderful sight and so low that I could see the people waving from the basket!  The North Downs are notoriously difficult to fly over as the air currents are quite strange, so it's not that often that we see the balloon so close.  Lucky people had a wonderful morning for their ride.  The goats weren't too impressed with it though - as it loomed over the barn, there was suddenly a lot of snorting and everyone dashed inside.

As David was out on baling duty again tonight, I was in charge of the goatie girls again.  It was nice to see our oldest goat Tammy come through the parlour next to one of her daughters, Dipsy.  Tammy is the slightly shaggy one to the left and Dipsy is to the right - looks like those 'shaggy' genes have been passed on to the next generation in abundance! 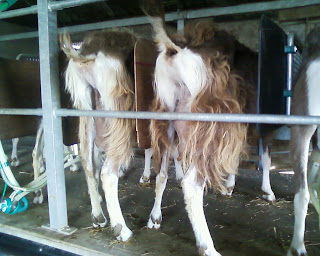 And there was a bit of pushing and shoving going on in the boys' house tonight as well.  As I climbed up the hay stack to fill up their hay rack, I was treated to a good view of Navajo and Daramac having a bit of a manly tussle:


They are such huge powerful beasties!  Looks like Beamish (to the right) was staying well out of the argument.