A trip to the vet for Hugo

And so Wednesday morning duly arrived and straight after morning milking, I loaded our rather large and stinky hormone-driven Hugo into the trailer and set off for the veterinary surgery where Peter was scheduled to perform a little 'operation' on him.

Poor Hugo!  I had explained to him what was going to happen but I don't think he really understood!

As I mentioned in the last post, we had taken the decision to have Hugo completely castrated for his own sanity and the safety of other goats in his area.  It was not a decision that was taken lightly - any operation carries a risk and although Hugo is a big healthy chap, this kind of procedure under general anaesthetic can be quite dangerous.

Having unloaded and weighed him (to calculate the anaesthetic dose), we moved him into one of the stables at the clinic where Peter gave him a couple of injections to sedate him.  Very quickly, Hugo sank down into a deep sleep. 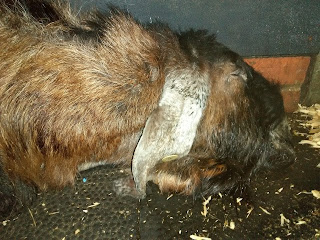 The operation was swift and perfectly executed by a well-practised Peter and his team of nurses and having administered a final dose of painkillers, they then left Hugo to come round in his own time.  And so I sat with his huge head in my lap, snoring and drooling away for almost 2 hours before he was finally conscious enough to haul himself to his feet.

Turn your sound up and you can hear him gently snoring away!


He is now recovering well at home and, when the hormones all finally work their way out of his system in a few weeks, he will be able to live permanently with all his old lady friends.  Lucky old Hugo!

And, just as a little footnote .. those of you who follow us on Twitter may have seen a photo of one of our little female kids who has recently been very poorly: 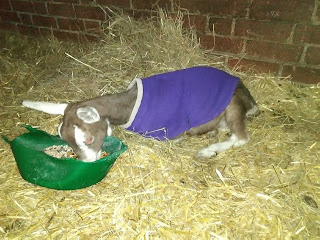 She has been living in a cosy corner with a nice warm fleecy jacket and a heat lamp and has been getting lots and lots of cuddles and treats and TLC ... All our efforts seem to have paid off as she is now much better and almost back to her usual cheeky little self .. 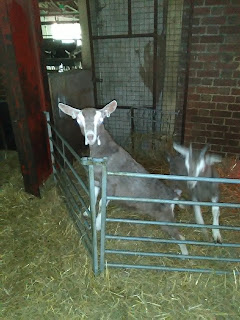 Such a difference and so nice to see!